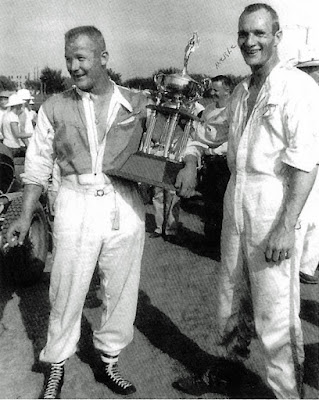 His benefactor was A.J. Shepherd of Gardena, Calif., who had been leading the championship event until his ride developed magneto trouble.

“A.J. was outrunning me,” said Neumayer, who had been trailing Shepherd for 49 of the 50 laps in the race.

Then, 27,202 spectators saw Shepherd pound on his steering wheel and jump up and down in the cockpit of his machine trying to coax more speed out of it. But Neumayer shot past him and won with three car lengths to spare.

Jerry Richert of Forest Lake, Minn., set a new world’s IMCA 12-lap record for the half-mile track as he sped the 6 miles in 4 minutes and 48.71 seconds to win the Minnesota State Championship for the third straight year.

Shepard wound up the point leader in big car racing at the fair with two wins in two features and second place finishes in two others.