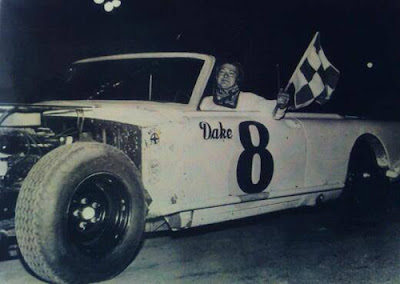 East Moline, Ill. (September 13, 1964) - The occasion warranted a spiffy new car, and Darrell Dake was ready for the occasion.

The veteran Cedar Rapids driver showed up at Quad-City Raceway on Sunday night in a newly-constructed white convertible to drive in the season championship 50-lap race for late model modifieds.

And drive it he did…

The season point leaders lined up at the front of the pack in the 17-car feature race field, and Dake was assigned the sixth position, with Shorty Bennett of Moline on the pole by virtue of his top ranking in point standings.

On a second restart, second-starting Benny Hofer of Rock Island spun and was placed in the rear, so Dake moved up to the fifth position.

When the race finally got under way, Bennett darted to the front and was pursued quickly by Jim Gerber of Davenport. Dake moved in, fought past Jerry Rinehart of Moline during the first 15 laps and the race then settled into a three-car duel, with Bennett out front and holding the fast groove.

Rinehart faded back in the field and his engine quit on the 29th lap. He parked along the wall on the back stretch and the race had to be stopped while he repaired his car.

On the restart, Bennett, Gerber and Dake again jumped away from the rest of the field. Dake slid inside of Gerber for second place and moved to challenged Bennett.

Riding the low groove on the track, which, by now, was getting slick, Dake finally managed to get by Bennett on the inside of the 34th circuit, and from that point, he had clear sailing to the checkered flag. Bennett settled for second, barely outlasting Del Williams of Aledo, who did the most spectacular bit of driving on the night.

On the 42nd lap, Williams lost his front wheel. He never even slowed, however, and kept on grinding, pushing Bennett and claiming third place. Gerber was fourth. Hofer finished fifth and Charley Moffitt of Stanwood, Iowa, came in sixth.