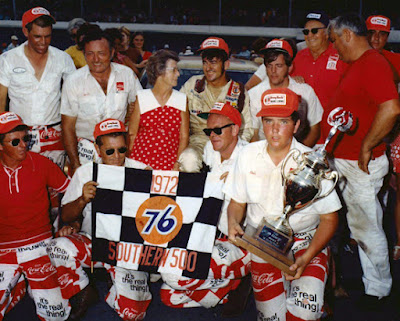 Bobby Allison is joined by his crew after a victory at Darlington.

The two leaders had to pit for gas with less than 20 laps left in the 367-lap event. Pearson used a 7.8-second stop to overtake the Chevrolet driver.

But on lap 362, Allison pulled around Pearson and crossed the finish line two car lengths ahead of the Mercury driver.

The two drivers completely outclassed the other 38 competitors in the field and waged a neck-and-neck duel throughout most of the race.

Pearson, who had to start in the 13th position because of a blown engine on the first day of qualifying, quickly closed the gap and was in second place by lap 15.

Allison led 13 times for a total of 229 laps while Pearson headed the pack 11 times for 123 laps. There were 30 lead changes among seven drivers.

Richard Petty, who had to make two unscheduled pit stops because of flat tires, finished third, seven laps behind the leaders. Fred Lorenzen, who started alongside Allison in the front row, finished fourth and H.B. Bailey, relieved by Lee Roy Yarbrough, took the fifth spot.

Several of the top drivers were taken out of action on lap 13 when Donnie Allison’s car went sideways in the third turn and the ensuing crash knocked Allison, Yarbrough, Bobby Isaac and Joe Frasson out of the race.