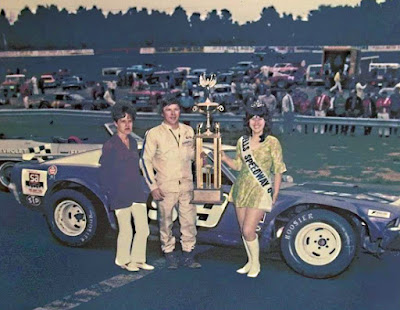 The victory was worth $2,680 to Trickle for the two-day event on the very fast high-banked third-mile. This victory sets a new national record for feature wins in one year as will each future win he gets through the remainder of the year.

At the drop of the green flag, Larry Phillips of Springfield, Mo., grabbed the lead from his outside front row starting position and he built up as much as a straightaway lead on the rest of the field.

With the fast time trialing 16 inverted at the start, Trickle, who qualified second, had to work his way up through the field from his eighth row starting position. On lap 19, Trickle moved ahead of Marlin Walbeck of Rib Lake, Wis., and then started to chip away at Phillips’ lead.

On lap 45 he pulled alongside Phillips and took over the top spot. From that point on, Trickle was never headed, and the eyes shifted to the battle for runner-up honors.

On lap 22 Marv Marzofka of Nekoosa, Wis., moved into third place and after Trickle passed Phillips, Marzofka took up the chase after him. Finally, on lap 78, Marzofka got past Phillips and move into second.

But Marzofka’s spot was not a secure one as the “Green Hornet” twin cars of Ed Howe of Beaverton, Mich., and Tom Maier of Midland, Mich., soon pulled up behind Marv and began applying pressure. After some 50 laps of bumper-to-bumper racing, Marzofka managed to pull away from the Michigan aces.

After a 15-minute weather delay, the only other battle was for fifth-place as Joe Shear of South Beloit, Ill., the race’s fast qualifier, battle with Phillips and finally succeeded in his bid for the fifth spot on lap 182.

From that point on, the running order remained the same and Trickle was able to lap all but the Marzofka, Maier and Howe.