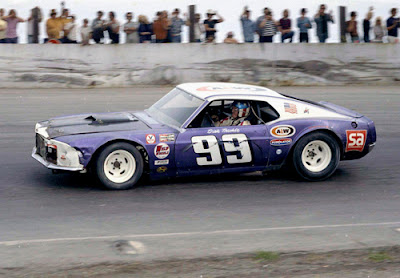 Morris, Ill. (September 23, 1973) - The North American Short Track Championships for Late Model Stock Cars at the Grundy County Speedway Sunday turned out to be the Wisconsin championships as Joe Shear and Dick Trickle dominated the action in the two 100-lap championship events.
Shear won the first 100-lapper in a close finish over Back and Trickle as the Illinois regulars managed five of the top ten spots. The second century saw Trickle taste the lead for the first time in the day on the 56th lap and then pull away from Shear after the final caution for the win.

Sunday’s wrap-up the two-day speed spectacular was a contrast to Saturday’s preliminaries where Illinois drivers won all seven events on the third-mile paved fairgrounds speedway. However, Saturday’s 12-car feature pile-up took its toll on equipment with most restarting Sunday in a crippled condition.

Track champion Ed Hoffman, in the center of Saturday’s melee, dropped out of the second race with engine vibration; Ray Young, the only other 100-lap winner in the track’s three-year history, cruised the distance with a stock replacement engine.

Larry Schuler cracked the fourth turn wall in the second race; and Tom Jones dropped out of the first race while running third with a burned piston.

The only serious accident of the day came in the opening laps of the first race when Bob Brevak backed into the third turn wall and set a new altitude record as Tom Reffner slid into him. Both cars were out for the balance of the program.

Following introductions of the 28 starters at trackside, Back shot past pole sitter Jones at the green flag to hold a firm lead for the first 30-laps before Shear worked his way to the front. For the next 20 circuits Back and Shear ran tightly through the traffic mainly in the outside groove before Shear took the lead.

In the 94th lap Dave Watson spun on the homestretch, bringing out the final caution flag and bunching the leaders to set up close finish.

After an intermission, the second race was line up in reverse order of the first finish with Lee Schuler taking the lead at the green for five laps before John Knaus came past on the outside groove for the lead.

Super modified driving star Johnny Reimer gave the hometown fans something to cheer about as he took the lead on the 10th lap, but in three laps Watson took over. Five laps later Reimer tried for the lead again, but Watson chopped him into the infield causing Reimer to lose nearly a lap. He finished 8th after dropping out of the first race when the rear-end locked up.

Trickle moved swiftly through the field to race side-by-side with Watson for several laps before the caution flag came out in the 52nd lap. When the green flew three laps later, Trickle moved into the lead past Watson and was not to be touched in the last half of the race.

The match between the country’s two 400-plus feature race winners — Dick Trickle and Bud Koehler — never developed as Koehler hit the wall in the first event and was not competitive in the second leg.

Before the start of the race, Koehler was most critical of the ‘no-bumping’ rule being enforced; “For 25 years we’ve (Raceway Park drivers) been building tanks to bang into each other with to fill the stands and today cars of half the weight come here to run. . . and we can’t touch them.”