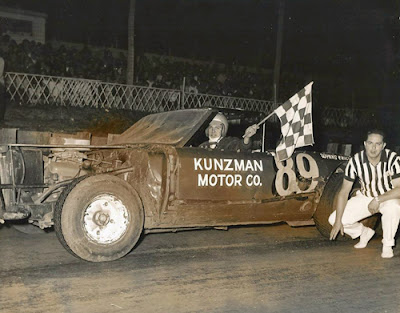 Sterling, Ill. (September 5, 1966) - Lee Kunzman of Guttenberg, Iowa, who started outside in the front row, was never thwarted in the 50-lap Labor Day Invitational race at Speedbowl Park Monday night as he grabbed the lead in the first lap and led the field for the remaining 49 laps.

Dake, who was running second, and Connolly, who was running sixth, hooked bumpers on the final lap when the two slid on water which was being spilled on the track by another car. The two were able to break apart with neither losing any positions. The spilling water caused Gerber’s car to slide high and allowed Bohlander to pass underneath him and take third place while Gerber had to settle for fourth.

The race was a real heartbreaker for Johnny Beauchamp who started on the pole by virtue of owning the fast-qualifying time of the night at 20 seconds flat. He ran a close second behind Kunzman for 44 laps before a spindle on the left front end of his car gave way midway through the 45th lap forcing him out. Beauchamp placed 12th in the field of 21 cars.

Verlin Eaker, who had spent almost all-day Monday rebuilding the engine in his 1965 Plymouth following his victory in the feature Sunday night, was another disappointed driver when a flat tire put him out of action on the 16th lap. The flat caused him to spin out in the #4 turn, however, he was able to guide his car to the infield without being struck. Eaker’s car had developed an overheating problem on the fifth lap of the Sunday night feature while leading the race but he continued touring the track at a torrid pace to win the event. He chartered an airplane at midnight Sunday night and flew to Cascade, Iowa and returned with four pistons which were installed in the engine of his car in time to make the Monday night show.

Bill McDonough, who has been driving hard at Speedbowl in his 1966 Chevrolet, dropped out of the event on the seventh lap with apparent engine trouble. Benny Hofer and Dean Montgomery, both of whom were running fairly well, fell by the wayside and dropped out on the 19th and 23rd laps respectively. Jim Ragsdale, a local driver, ran for 27 laps before he left the race. Jerry Reinhart, who blew Ute engine in his 1964 Ford Sunday night, drove Rick Mocklin’s cadet class car for 20 laps before pulling out.

Race fans saw a real battle in the fast heat race when Jim Gerber and Darrel Dake battled it out. Gerber started on the outside of Dake in the front row of this event and promptly pulled in front of him handily with his 1966 Charger. Fans thought they were seeing the impossible as Gerber’s car began to pull away from Dake down the straightaways, but Dake showed his consistent driving which makes him the man to beat when he pulled close behind Gerber in the corners. Gerber went a little too high in the number one and two turns midway through the event and Dake, who was close behind, promptly sped past underneath him and then lengthened a lead.