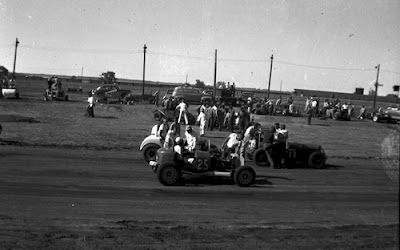 A Sunday afternoon of racing begins at Hastings, Nebraska


by Lee Ackerman
Papillion, Neb. - If you think auto racing is a dangerous sport today, let me tell you about the good old days. Well maybe just the old days. Have you ever seen a movie where two young guys go drag racing down the street in their souped up deuce coupes? Let’s go back to the late 40’s and early 50’s and I’ll tell you about the Nebraska Hot Rod Racing Association.


It all started in in 1948 when a group of hot rod owners got together to form a racing association to race on dirt tracks. That first year they ran a series of exhibition races during Big Car (Sprint Car) show.


In 1949 the association started holding their own races with the first being held at in June. Now you have to remember this was back before you could order a race chassis from a manufacturer and these cars were pretty crude. Guys just took old cars or hot rods and started chopping. Out came the cutting torches and they started cutting away.


Safety features were almost non-existent. Some of the cars had a roll bar behind the drivers, but that was about it. Later some drivers put bars in front of them. The reason for these bars was that some of the fairground tracks they raced on had fences (both wooden and wire) and those fences could decapitate a driver if he had the misfortune to drive through them.


In the few short years of the association’s existence, they raced at tracks in , Fairbury, , Nelson, Broken Bow, Holdrege, Beatrice, , Ord, Osceola, Wahoo and . They also raced at least twice at Riverside Speedway (also called Blue Heron) which was located just across the in . In addition, they held events at tracks outside of at tracks in and , and . 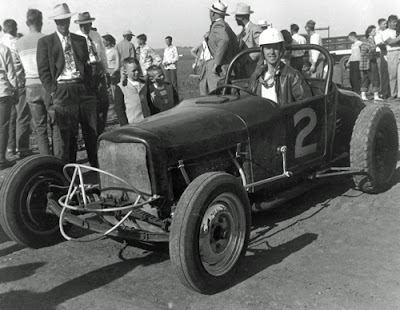 Chuck Sears of Hastings, Neb., was one of the top drivers in the NHRRA. - Bob Mays Collection


Many of the best drivers from the NHRRA have been inducted into the Nebraska Auto Racing Hall of Fame. Those include 1949-1950 NHRRA champion Gordie Shuck of Edgar, 1951-52 champion Andy Anderson of , Frank Brennfoerder of Lincoln, Jim Gessford and Chuck Sears of and Bill Smith of . Other drivers who had success in the hot rods include Curley Wadsworth, Gaylord Heiger and Bob Rager.


On occasion these drivers would be joined by out of state drivers such as future NASCAR stars Johnny Beauchamp and Tiny Lund from . Such was the case late in the 1949 racing season when the Hot Rods made two trips to the Gage County Fairgrounds in Beatrice.


On Sunday, August 28, 1949 a larger than capacity crowd estimated at more than 2,500 fans packed the Gage County Fairgrounds for their first look at the “Hot Rods.” Several hundred folks were also watching from beyond the southeast corner. After, time trials drivers and pit crews passed the hat to these spectators raising another $40.63 which was added to the purse. The total purse for the day was $717.23 a good size purse for 1949.


The drivers were greeted with a spongy and rough track but they made the best of it in time trials. Johnny Beauchamp of , would turn laps several seconds faster than the Hot Rods had turned at the week before. Beauchamp set fast time of 33.2 seconds with ’s Gordie Shuck having second fastest time at 33.7 and Howard Madsen turning a lap at 33.9 seconds. Also in the field was another future NASCAR star in DeWayne (Tiny) Lund of Harlan as well as Billy Smith of Lincoln, who has since become known to the racing world as simply “Speedy Bill.”


The first race of the day was a match between the two fastest cars Beauchamp and Shuck. The two battled it out with Beauchamp getting the win and $21.54, Shuck got $14.34. The next race was for the seven slowest cars and it would be Oscar Warford of Ord, Nebraska winning the event over Norman Shaffer. 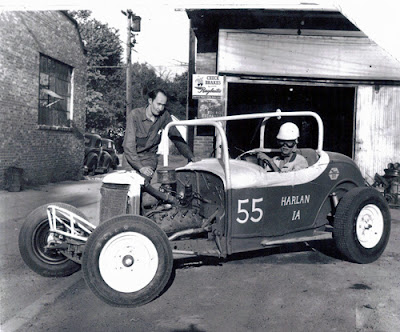 Dale Swanson and Johnny Beauchamp in the Hot Rod days

The next event found the six fastest cars racing (with Shuck temporarily sidelined with car problems). Beauchamp won win that event with Jim Kucera of Ord second and Dick Richardson third. Howard Madsen would then win the consolation event with Billy Smith running second. The last race before the feature had the six fastest cars in an inverted start. This provided lots of excitement as Beauchamp passed a car a lap to take the win with Shaffer and Worford rounding out the top three.


The last race found the fastest eight cars going for 10 laps, twice the distance of the previous events. This event Beauchamp ran into more than he could handle as Shuck had returned to the action and he would hold off Beauchamp in a heated battle to the win. Following Shuck and Beauchamp were Warford, Shaffer and Kucera. Beauchamp ended up being the day’s big money winner with $200.81


VFW officials apologized for getting things off to a slow start but it was their first attempt at race promoting. They said they would learn through experience just like the drivers who were mostly young men of 18 or 19 years of age. 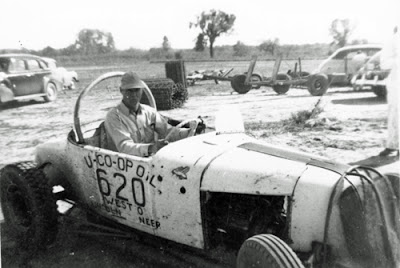 
On October 2, 1949 the “Hot Rods” returned to Beatrice Fairgrounds where a crowd of about 1,200 fans in the grandstand plus another 1,000 watching for free on the adjoining railroad tracks had returned to see these crazy young men again. Beauchamp would once again set fast time in the Dale Swanson Hot Rod with a lap of 30.08 seconds with Shuck tripping the clocks at 32.1 seconds.


This time in the match race or trophy dash which this time included several cars, it was Shuck’s turn to take home the win in another closely fought battle. Keith Holster of would win the second race which pitted six of the faster cars. Max Schlagel of was second and Leonard Colhorst of Beatrice third.


Norm Plouzek of would nose out Beatrice’s Mark Clausen in the slower heat with Billy Smith finishing third. The winner’s race was next and again it was a Beauchamp-Shuck battle with Beauchamp coming home just in front of Shuck with Del Whitcomb of Beatrice third. The 10 lap feature would once again be a battle between Beauchamp and Shuck with Beauchamp getting the best this time. Keith Holster, Max Schlagel and Mark Clausen would round at the top five. Beauchamp would leave Beatrice this time the feature winner but his earnings for the day were just $94.22.


The Hot Rods would continue to race for another two or three years but by 1953, the car counts were dropping and many drivers opted to race either in the new United Motor Contest Association for sprint cars or raced coupes and sedans in stock car races. But back in the day it was those “Daredevils and their flying Jalopies.” 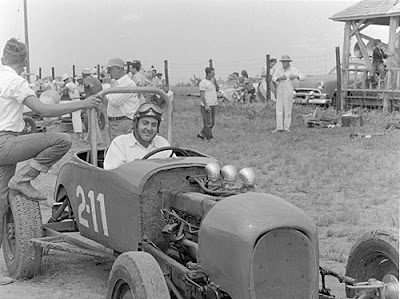