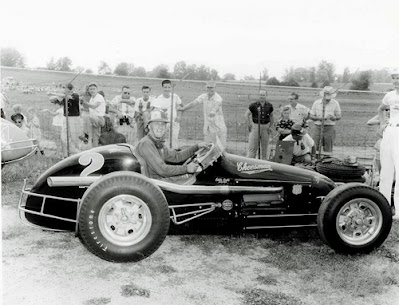 Sachs in the Cheesman Special won the 50-mile feature after catching Pat O'Connor of North Vernon, Ind., on the 43rd lap. It was strictly a two-car race between Sachs and O'Connor the entire route. O'Connor pushed Sachs all the way.

The North Vernon speedster, who was piloting the Bob Estes Special, finished in second place. He also set the fastest qualifying time of the afternoon.

The race which attracted a nearly record crowd and some of the nation’s top drivers was delayed until almost 5 o'clock due to rain.

Fifth place went to Bob Veith the 1956 Indianapolis Speedway “Rookie of the year”.