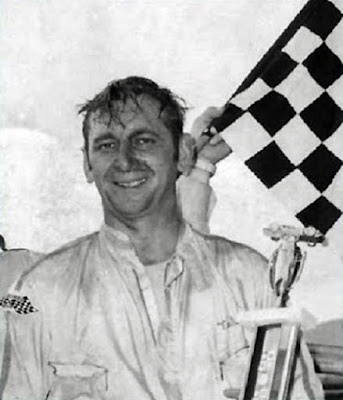 Lincoln, Neb. (September 1, 1974) - Earl Wagner, the driving plumber from Pleasantville, Iowa, gave a demonstration of his specialty — rim-riding — and the result was a main event victory in the second of three days of sprint car racing at the Nebraska State Fairgrounds Sunday.

Wagner, who earlier had won his heat, took the lead on the fifth lap from early pacesetter Ron Shuman of Tempe, Ariz., and then breezed home for the win in the 30-lap IMCA-sanctioned event.

Bill Utz, of Sedalia, Mo., who had won the first day’s feature, ended up second to Wagner in the race.

The second place finish was crucial for Utz, who is in a tight battle with Larry Kirkpatrick of Wood River, Ill., for the IMCA point championship.

Coming into the race, Utz had a 20-point lead. But he lost ground in the heat races as Kirkpatrick finished first in his heat, while Utz finished second.

But in the main event, Kirkpatrick was never able to get untracked, dropping out with two laps to go because of his car overheating. The net result was that Utz expanded his lead to 135 points after the day’s action.

Wagner, as his nickname implies, took a higher route around the track in garnering the victory, but he downplayed his image.

“It’s not really the rim-riding so much,” said Wagner. “It’s more a question of having a lot of faith in the people who work on the car and knowing that nothing's going to go wrong.”

Wagner noted that actually he took a low route around the track in winning his heat.

“After the heat race that part of the track wore out and the cushion moved up higher,” said Wagner. “So, we changed from drag tires to two-step diamonds, a narrower tire that digs into the loose stuff and gets you better traction racing up near the marbles.”

“We weren’t too sure after the heat race whether we should have changed tires or not. It was a gamble, but fortunately it worked.”

For Wagner the win was gratifying as he is making something of a comeback after breaking his shoulder and wrecking his car at Knoxville, Iowa, earlier this summer.

“We’ve only raced this car four or five times since the accident,” noted Wagner. “We’ve had a little trouble getting the car set up to run the way we want it to, although, obviously we like the way it ran today.”

Wagner, who says he’s almost 100 % recovered, noted that his owner, Hank Smith of Mt. Ayr, Iowa, installed power steering in the new car. “That has allowed me to come back sooner than I might have, because without power steering it takes a lot more strength to drive the car.”

Two track records were set during the day’s racing. Wagner set a record for 8 laps around the track with a 3:16.14 clocking, while in the trophy dash, Shuman set a five-lap best time of 2:01.66.

Only one accident marred the day’s action. In the consolation race six cars piled up in turn one. No drivers were seriously injured, although several of the cars were severely damaged.