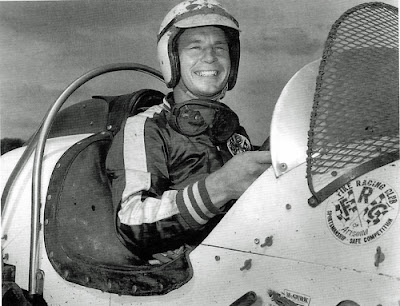 St. Paul, Minn. (September 1, 1959) – Three track records were set on Tuesday afternoon and a stock-block conversion won the sprint car feature for the first time ever at the Minnesota State Fair.

Jim Hurtubise of North Tonawanda, N.Y., who won the 10-lap semi-final and pushed Jones in the feature, set a new mark in the 7-lap consolation. He turned the distance in 2 minutes and 59.90 seconds, erasing Harvey Porter’s 1957 standard of 2 minutes and 56.17 seconds.

Jones and Hurtubise collided in the first turn of the first heat with no serious damage. Jack Rounds of Huntington Beach, Calif., got a wheel on the retaining wall of the backstretch in the second heat and had to withdraw with a bent axle.