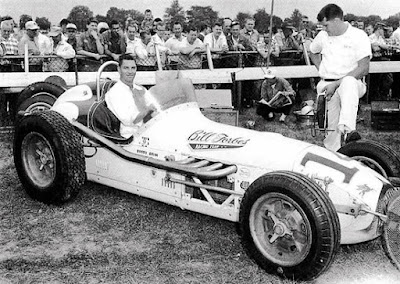 Syracuse, N.Y. (September 10, 1960) - In a race which wasn't decided until the last second, Bobby Grim, an alert, coolheaded driver from Indianapolis, fought off a dramatic challenge by the veteran Tony Bettenhausen and copped the top prize in the annual 100-mile "big car" classic at the New York State Fairgrounds before thousands of enthusiastic fans.

The winner, who will be 36 years old September 24, zoomed home speed of 93.21 miles an hour but was only a fraction of a second ahead of the onrushing Bettenhausen, whose blazing burst in the final lap brought him within 10 feet of the winner at the finish line.

Much of the drama was packed into the last 25 miles of the accident-free speed classic which drew a paid capacity crowd of 10,000 to the grandstand and bleachers while thousands more lined the inner guardrails. With 25 miles to go, Grim was about one third of a mile ahead of Bettenhausen, a three-time winner in previous races at the Fair here.

Tony, who will be 44 years old on Monday, kept cutting into Grim's lead, showing a high degree of skill in zipping through traffic on the turns, and he was right on Grim's tail -when the rivals hit the first turn on the last mile. With Bettenhausen trying to muscle inside of him, Grim, who said afterwards that he had been saving his tires with careful driving in the late stages, had the courage and skill needed to fight back Bettenhausen’s challenges as he came home the winner by the narrowest of margins.

A.J. Foyt of Houston, Tex., was third finished third about a half-mile behind the leaders, and Johnny Thomson of Boyertown, Penn., “The Flying Scot” who holds the track record here, was fourth. Ernie Koch of Vancouver, Wash., was fifth.

As the crowd gathered around the winner, at the end of the race, awaiting the trophy presentation, Grim was asked, “Did you realize someone was chasing you?”

And Grim showed a dry wit in responding, “I figured there was somebody there.”

Bettenhausen, congratulating the winner, and happy over his second-place finish, yelled at Grim, “I was coming!”

Thomson’ fast time in qualifying won him the pole position and the other leaders with good breakaway spots were Jim Packard, Grim, Chuck Hulse, Rodger Ward and Don Branson.

Packard held the lead for the first three laps before Thomson went to the front and Grim moved up to second as Packard started to drop back.

The orange color of Thomson’s car looked like a good Syracuse omen for him as he held the lead until the 20th mile when Grim burst past Thomson to the head of the field, where he would start for the remainder of the race.

Bettenhausen started his long drive from his 13th starting position and electrifying the crowd with his daring driving in the turns, especially the first one as he rocketed in close to the guardrail and forced his opponents out has, he passed them.

Ward would experience mechanical trouble and on lap 39 retired to the infield, handing second-place back to Thomson. Bettenhausen, taking aim on the leaders, passed Thomson on lap 55 to take over second spot and set his sights on Grim.

After that it was a sustained question as to whether or not Bettenhausen could overtake the leader and it wasn’t settled until the final circuit.