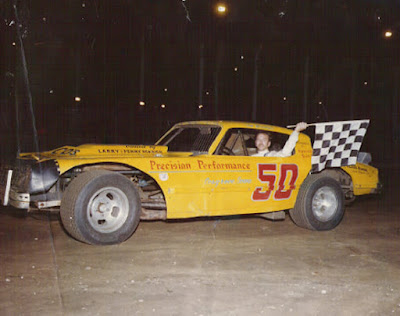 Tom Hearst carries the checkers after winning the Eldon Classic.

Tom Hearst, Wilton, fresh from a third-place finish in the Yankee Dirt Track Classic, and being recently crowned the season champion at Davenport, won the 50-lap championship feature. In addition to the $1,200 payday, Hearst also led every lap on the super half-mile to collect an additional $500.

Joe Merryfield, Des Moines, Ron Jackson, Burlington, and Dan Dickey, Packwood, all tried their best to move Hearst from his self-appointed lead but were never able to push into the lead.

Fred Horn, Marion, the recently crowned Yankee Dirt Track Champion, and pre-race favorite, blew an engine while leading the first heat and retired for the evening.