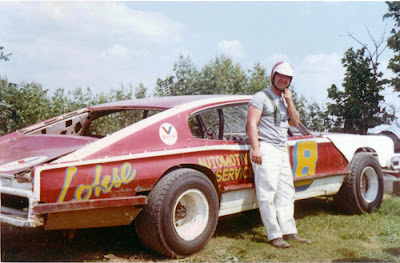 Gerber, the personable Mount Joy, Iowa, driver who only got back into action a week ago after a three-week layoff with a broken wrist, found himself “cast in a new role” last night.

Still wearing a cast on his right, wrist, Gerber was able to win the 50-lap season championship race with ease as the race went through without a restart. In winning the 50- lapper, Gerber assured himself the season championship at Raceway — his first season point title m the Quad-Cities.

Despite his recent injury, inclined early in August in a wreck at Burlington, Gerber came into last night’s program as season point leader, about 200 points ahead of defending champion Ron Weedon of Pleasant Valley.

Gerber started on the pole in the 50-Iap feature, beat Weedon into the first turn and the race could have ended then. Gerber pulled away through the early laps, built a quarter-lap lead and maintained it as the two old rivals battled traffic the last 35 circuits.

Gerber, who started on the pole, came across the starting line one-half length ahead of Weedon and came out of the first turn a car length in front. During the first few laps, before he encountered traffic, Gerber built a comfortable quarter-lap lead over Weedon and maintained it as the two old rivals battled traffic the last 35 circuits.

Veteran Ernie Speth of Davenport ran third all the way, and Wendell Essex of Davenport nosed out Ray Guss of Milan for fourth place in the most strenuous racing competition.