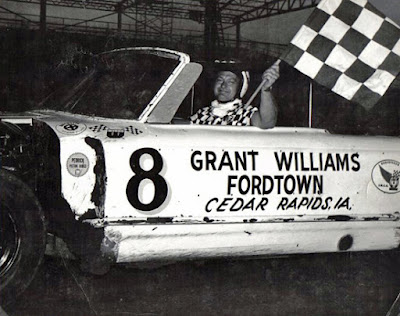 A crowd estimated at 4,000 watched the races sanctioned by the Mid-Continent Racing Association.

Dake, the reigning MCRA point leader for the 1965 season, had the pole position by virtue of his accumulated points. Droste, however, burst into the lead which stood for the first 21 laps.

Overtaken on the 22nd circuit, Droste “retired” to the pit area on lap 23. “My going to the pits had nothing to do with my rib injury,” Droste stated afterwards. “It was just a case of car trouble.”

It was speculated that the four ribs broken by Droste in a recent race-related accident forced him from the action.

Droste’s quick lead came to no surprise to Dake. “I figured he would try and get the jump on me and grab the lead first,” Dake said.

The novice feature – won by Roger Dolan of Lisbon – was accident-prone from the beginning. On the first lap, Al Mengler of Cedar Rapids spun out of control, causing a six-car pileup in the third turn.