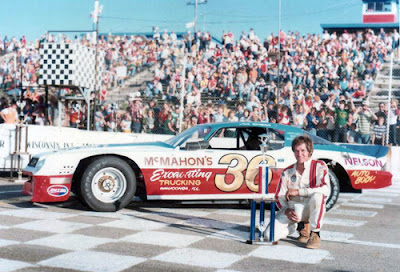 Joe Shear won his first race at WIR since 1973 when he took the 60-lap finale of the Red, White and Blue Series. – Jim Vercauteren Photo

Kaukauna, Wis. (September 16, 1979) – Joe Shear, in his first appearance of the year at Wisconsin International Raceway, scored a thrilling quarter-length win over Dave Watson in the final race of the Red, White, and Blue Series on Sunday afternoon before 5,209 fans.

The victory was Shear’s first at Kaukauna since 1973. The final laps of the race were as wild as nay ever run on the half-mile paved oval, as Shear held back challenges from Johnny Ziegler and Watson during the final six circuits with the crowd on its feet.

Dick Trickle, who missed the final race in the series, edged out Shear and Watson in the final point standings. Trickle totaled 1,965 points while Shear ended up with 1,880 and Watson tallied 1,795. It was the fourth series title for Trickle as he previously won the crown in 1972, 1977, and 1978.

John Knaus led the first lap of the feature race before being overtaken by Bob Gunn. Knaus regain the lead on lap 4 and set the pace until the 9th lap when Willie Goeden used the inside groove to slip into the top position.

Watson took over second place on lap 13and nosed inside of Goeden on the 14th circuit to take the lead. Shear, meanwhile, moved into third on lap 18 and went around Goeden for second place on the 20th lap.

The yellow flag came out on lap 21 when Ted Musgrave spun in the third turn. The caution put Shear right on Watson’s bumper for the restart. A spin by Rich Somers resulted in his Mustang getting rapped by Jerry Eckhardt’s Camaro and that brought out another yellow on lap 22.

Watson made a hasty pit stop to repair a broke throttle spring on his car under the yellow flag. The pit stop dropped him to the rear of the field and handed the lead over to Shear.

Shear opened up a six-car-length margin when the green flag came out. John Ziegler, the ’75 Red, White and Blue champion, moved into second on lap 26 and whittled Shear’s lead down to three-car-lengths by lap 45. Watson, meanwhile, had fought his way back to the front, gaining third position on lap 46.

Ziegler closed in on Shear’s bumper on the 48th go-round and several times pulled alongside Shear’s rear quarter-panel going into the first turn.

The final six laps were at full throttle for the three leaders. Watson pulled to the outside of Ziegler on lap 55 in a battle for second position with both drivers less than a car-length behind Shear.

Ziegler, with his foot to the floor, drifted high going into the first turn on lap 57 with Watson swinging low under him to grab second.

Shear and Watson ran wheel-to-wheel to the finish, with the two veterans coming out of the final turn to the checkered flag inches apart with Shear winning by a quarter-car-length.