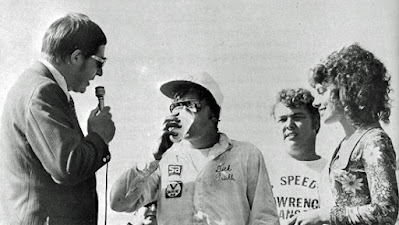 St. Paul, Minn. September 4, 1972) – For an ordinary racer, a blown engine Saturday at the Minnesota State Fair would mean a lot of work in order to get ready for the big Labor Day North Star 500.

But Dick Trickle is no ordinary racer. He lost his engine on Saturday afternoon, probably costing him $600 in winnings, but he stayed up all night to get a new engine installed in his 1970 Mustang.

Then, he and his crew ran the car Sunday afternoon at Kaukauna, Wis., where he finished second in the feature, then hauled to Wisconsin Rapids, Wis., his hometown, Sunday night, where he won the feature at Golden Sands Speedway.

Only then did Trickle return to the Twin Cities for Monday’s big race. Again, for an ordinary racer, seven pit stops instead of two, a damaged oil pan, a crash into the outer wall, and running out of gas on the main straightaway would have been more than enough to knock him out of the race.

But Trickle survived all that with only three hours of sleep since Friday and dazzled 9,271 race fans by speeding to victory with three laps to spare over Dick Stang of Prior Lake, Minn.

Stang had trailed by five full laps when Trickle’s Mustang sputtered out of gas on the main straightaway, finishing it’s 497th lap.

While Trickle coxed the car to coast a full lap and head for the pits, the crews of three Wisconsin buddies – Marv Marzofka of Nekoosa, Jim Sauter of Necedah and Tom Reffner of Rudolph – ran down to help if he needed a push. All three had dropped out with mechanical issues, Reffner while apparently headed for a sure victory on the 318th lap.

Trickle then got refueled, then needed a push start from a truck to get going, but still had enough of a cushion to win by three laps.

Trickle explained that he could have made the distance on two stops “if everything would have gone perfect. I ended up making seven stops, but I’ll guarantee you, they weren’t for directions.”

Trickle’s first stop was on lap 60 during a caution flag because his hood pin had broken.

Marzofka led the first six laps before Bill Oas of Bloomington, Minn., took over for 21 laps. He would end up spinning in his own oil, going into the wall and taking Bill Mueller of Minneapolis.

Reffner took the lead when Trickle pitted and held it from the 61st lap until the 140th. Trickle, making up time with clearly the fastest car on the track, beat Reffner for the lead on lap 141 on the half-mile, paved oval.

On lap 154, Bill Wirth had the engine in his Chevelle let go just as Trickle was about to lap him. Both cars skated into the outer wall in the first turn, causing Trickle to limp to the pits for a 2.5-minute stop. He went out, did one lap under the caution flag, and pitted for the third time.

Marzofka took a turn at leading but a succession of pit stops and a rear-end failure eventually knocked him out. Stang got up front, but yielded to Reffner, who was out to set a new 250-lap record of 1 hour, 32 minutes and 29.06 seconds.

Trickle was going about a second a lap faster than Reffner but was black-flagged to have his loose hood wired down on lap 234.

By the 250-lap midpoint, Reffner led Stang by one lap, and Trickle was in fifth place, two laps down. Trickle’s hood again worked itself loose and he was flagged in again for repairs on lap 273, dropping him four laps off of Reffner’s pace.

But Reffner, who had led for 180 of the first 300 laps, lost his water on lap 318. Trickle, among others, made another quick stop during the ensuing caution flag. Sauter, who assumed the lead when Reffner pitted, would be through when his wheel bearings seized on lap 336.

Jeff Haar and Stang contested the lead from that point until Haar made two long pit stops on lap 375, and Trickle breezed past Stang to take the lead for good.