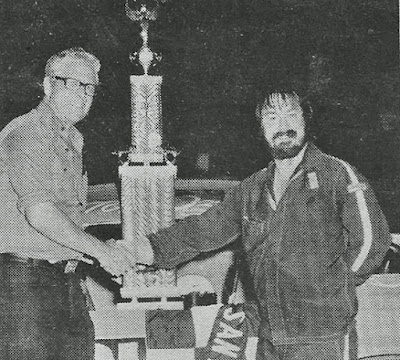 The win was the second major triumph in eight days for Izzo, who had won the Tony Bettenhausen Memorial 100 at Illiana (Schererville, Ind) Motor Speedway’s paved oval last Sunday.

After clinching the pole starting position for Sunday’s main event by winning the second 25-lap Silver Twins feature on Saturday night, Izzo displayed his winning form for the first time on Sunday by breaking his own year-old track qualifying standard of 19.16 seconds with a 19.10 clocking on the speedway’s longer oval in time trials.

With his 1978 Camaro performing flawlessly, Izzo then turned the 200-lap main event into a rout, lapping each of his 32 opponents en route to a wire-to-wire victory. It was the 17th feature win of the season for the Bridgeview, Ill., driver at Santa Fe and his fourth on the facilities’ longer circuit.

Art “Fireball” Fehrman of Worth, Ill., came in second, his best finish ever at the track. Jerry Smith of Appleton, Wis., completed the last spot on the podium with a third-place finish.

A victory in the first Silver Twins headliner on Saturday night enabled O’Conner to start alongside Izzo on the front row. However, O’Conner proved to be no match for Izzo and then his victory hopes were jolted on lap 20 when he spun in turn one.

O’Conner retired his mount shortly afterward but returned to the contest by taking over Pohlman’s car during the mandatory 10-minute mid-race pit stop for the field. Pohlman’s vehicle was the same car O’Conner had driven to the 1976 Santa Fe championship.