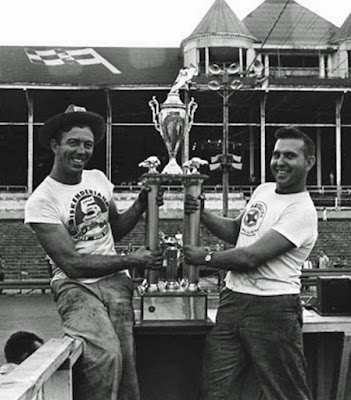 Red Farmer (left) and Friday Hassler tug at the Southern 300 winner’s trophy during a publicity photo for the 1962 classic.

Nashville, Tenn. (September 30, 1962) – About the biggest problem Friday Hassler had at the Fairgrounds Speedway on Sunday was how to get his gigantic Southern 300 winner’s trophy home in one piece.

“This is one of the more pleasant headaches you have in stock car racing,” grinned the Chattanoogan as he dismantled the prize for safe handling. He never did find a place in his truck to put it and wound up giving it to a friend to carry home.

However, he probably he didn’t need any help carrying home the $1,000 he earned for finishing first in front of 32 other drivers in the final auto race of the season. A crowd of 7,656 watched the action.

It was a sweet victory (and the richest) for Hassler, who totally demolished his car in Montgomery, Ala., in June and had to sit out six weeks. He and his chief mechanic, David Walker, built an entirely new one with a 327-cubic inch Chevrolet engine, and it couldn’t have performed better on Sunday.

Hassler started the race in the eighth position and drove cautiously for the first 100 laps while Donnie and Bobby Allison lapped everyone in the field except Red Farmer, Fred Thompson, and himself.

About that time, both Allison’s had to pit for tires, Thompson got caught up in a six-car wreck on the back straightaway, and Farmer and Hassler suddenly found themselves running 1-2.

Farmer pitted on the 148th lap, then blew an engine shortly thereafter, and it was Hassler and Malcom Brady dueling for the lead the rest of the way.

Down in Brady’s pit, the crew was elated. Brady was about 10 seconds ahead of Hassler. The laps rolled by, and Hassler was unable to gain on the leader. It began to look as if Brady was on his way to the victory.

But Brady’s pit crew’s fuel calculations were wrong. On the 265th circuit, Brady ran out of gas. He whirled into the pits for a 10-second fuel stop, but that was all Hassler needed. By the time Brady got back up to speed, Hassler was by him and already building up a half-lap margin.

There was a brief moment of excitement when Bobby Allison wrecked on the front straightaway trying to pass Coo Coo Marlin for third place on lap 295. The yellow flag came out until lap 299, and the race was finished on one green flag lap.