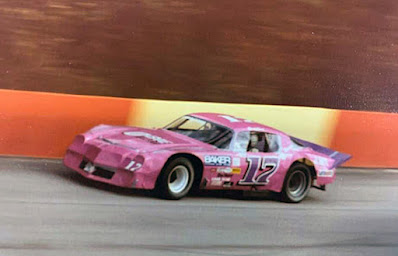 Winchester, Ind. (September 5, 1977) – Randy Sweet survived a 35th lap accident and went on to win the “Flagship 100” for the ASA Circuit of Champions stock cars at Winchester Speedway on Monday afternoon.

Sweet rejoined the field at the tail of the pack after the accident and moved steadily to the front. He took the lead on the 90th lap when runaway leader Dave Watson tangled with another car on the backstretch and spun out of the competition.

Sweet was running sixth on lap 35 when third-place Vern Schrock of Middlebury, spun in the fourth turn, taking the fourth, fifth and sixth-place cars with him. Involved in addition to Sweet was Mike Eddy, Kawkawlin, Mich., and John Anderson, Warren, Ohio. Only Sweet was able to continue on.

Senneker started from the pole position and led the first 52 circuits before Watson, the current ASA point leader, stormed around him and took over the top spot. Watson led through lap 89 until Ray Barnard left him with nowhere to go in the third turn. The two came together and wound up on the infield grass.

Martin, who only weighs 105 pounds, was seeing Winchester for the first time on Monday. He started the feature in the 12th spot, and drove a steady, heady race to finish in the top-five.