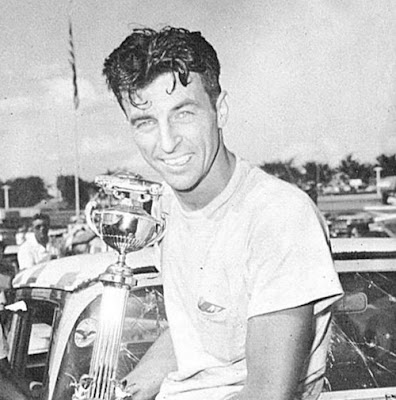 White finished half a lap in front of his brother-in-law Ernie Derr of Keokuk. Taking the lead after four laps, White also gathered a pile of lap money at the rate of $10 per 10 laps as he never relinquished the top spot.

The victorious drive actually started at Bethany, Mo., for White. He, Derr, Herschel Buchanan and several other top drivers competed there Sunday afternoon and arrived at the Des Moines track with little or no time to spare – too late for time trials.

Consequently, they started at the rear of the field. Buchanan, the veteran from Shreveport, La., finished third.

The closest race evolved between Derr and Jim Ward of Houston, Tex., for second place.

Ward maintained a stubborn hold on that position by making it difficult for Derr to pass, but he dropped out on lap 122 with what was believed to be a broken flywheel.

Chris Skadal of Des Moines, and a local favorite of the crowd, dropped out on lap 122 as well, and then re-entered the race on lap 206, 84 laps down to the leaders.

Skadal might have sacrificed a chance for 12th place money when he stopped long enough to push Newt Bartholomew of Carlisle, who had stalled, into the pit area on the backstretch.

His brother, Jack, also of Des Moines, managed to grab the last spot in the money list.

Buchanan, latest of the tardy drivers, barley got on the track when the green flag waved. He lost two laps during the race taking off a broken bug screen.