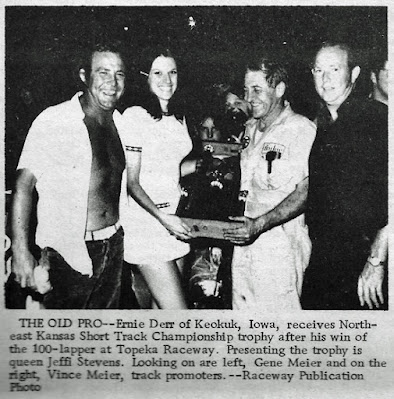 Topeka, Kan. (September 16, 1972) – One of the biggest crowds of the Topeka Raceway season came out to see the old master of the IMCA circuit, Ernie Derr, run Saturday night.

The Keokuk, Iowa, flash – who was billed as the top attraction for the Northeast Kansas Stock Car Championships prior to and throughout the two weekends of rainouts – turned out to be just that.

Not only did he flash his fabled red and white Dodge Charger around the track for the fastest time (17.76 seconds) in qualifying, but he came back some three hours later to win the 100-lap feature by nearly three full laps over his nearest competitors.

Derr, who was a consistent winner on the IMCA circuit before pulling out this year, actually trailed for the first 15 laps of the main event as Ken Baker of Kansas City, driving a 1964 Ford, jumped into the early lead.

From there on, it was no contest…

Derr and his Dodge Charger zipped to a two-car length lead over Baker on lap 17, and Baker pulled out of the running four laps later, with Don Morris, who had earlier won a heat race and trophy dash, moving into second.

Morris was no match for Derr, though, and while still holding second-place, trailed by more than half a lap after 23 tours around the quarter-mile dirt oval.

The eventual winner took a full lap’s lead on lap 48, passing Morris, who promptly fell back into third behind Dale McDaniel. On the next lap, Morris pulled into the pits.

Jerre Wichman got past McDaniel a few laps later and held second spot for a while, but he too had to pull out when his Chevelle overheated on lap 70.

By that time, Derr had the race sewn up and merely need to stay out of trouble in order to collect the $1,000 first prize. He lapped the field an entire time again by lap 83 and gradually added to his margin throughout the remaining 17 circuits.

There was one close call for Derr, however. On lap 98, and in heavy traffic, Derr barely averted a spin in the second turn when he bumped into the rear quarter panel of a slower car in the field.. But, after making the fans take a deep gasp, he regained control and surged out of the trouble area.

In tine trials, Derr’s 17.76 second clocking was tops among the 50 cars entered. Baker was only a fraction slower in qualifying, with time of 17.79 seconds. None of the other drivers managed to get under 18 seconds.