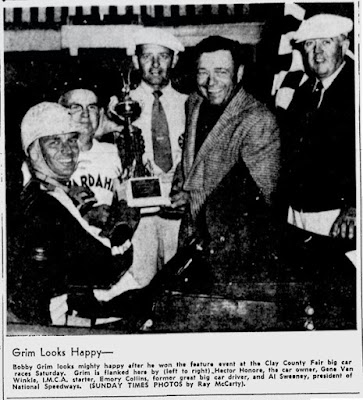 Spencer, Iowa (September 14, 1957) – Bobby Grim of Indianapolis made a clean sweep of the feature events at the Clay County Fair on Saturday, winning the 25-lap Emory Collins Sweepstakes.

He had a good eighth of a lap lead on runner-up Buzz Barton of Tampa, Fla. The battle between Barton and third-place finisher Johnny Pouelson of Gardenia, Calif., had the sellout crowd on their feet at the finish.

It was Barton by a car-length at the checkered flag. From the very start, it was a neck-and-neck battle between, Barton, Pouelson and Don Carr of Detroit. Carr finished fourth with Bob Cleburg of Rio, Wis., rounding out the top-five.

Sixteen cars started the main event but only 13 finished the contest. Vern Chamberlain of Minneapolis and Al “Cotton” Farmer of Dallas, Tex., locked wheels on the fourth lap, causing them both to spin out. Both cars were severely damaged and could not finish the race.

On the very next lap, Harry Kern of St. Paul, Minn., lot a front wheel, causing him to hit the cement retaining wall and damaging the front end of his car.

Because of the accidents, the race had to be stopped so wreckers could remove the cars from the track, causing the clock to stop – therefore, no time was kept on the race according to IMCA rules.

One track record did fall, however, as Farmer lowered the existing Fair mark in the 5-lap match race between the four fastest qualifiers.