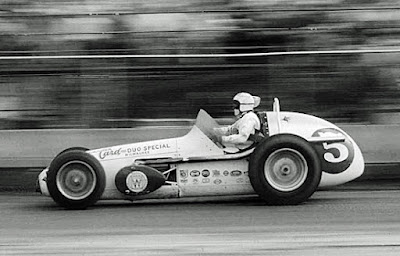 Tony Bettenhausen of Tinley Park, Ill., the defending USAC champion, and only driver who had an outside chance to catch Ward, was wrecked a little over halfway through the race but escaped injury.

Eddie Sachs of Center Valley, Penn., was right on Ward’s tailpipe at the finish of the race but couldn't quite catch him.

A crowd estimated at 24,000 jammed the Indiana State Fairgrounds grandstand and bleachers and overflowed into the infield of the mile-long dirt track.

Ward, the winner of the Indianapolis 500-miler and the Du Quoin, Ill., 100-miler, led every lap in a perfectly driven race. That feat alone earned him $2,500 in lap prizes. He and car owner Bob Wilke of Milwaukee will share together $11,675 out of a total purse of $36,817, the biggest ever paid for a dirt track race.

Bettenhausen drove a tremendous race in his last chance to stay in the running for the national title. Starting tenth among the 18 starters, he wheeled into second place by the 18th mile. He yielded the second spot to Eddie Sachs on lap 55 and then had his mishap.

Jim Hurtubise of Lennox, Calif., driving in his first USAC championship race, hot the guard rail and spun in front of Bettenhausen. Bettenhausen barely nicked the tail of Hurtubise’s car, but the impact was enough to burst his right rear tire and damage the wheel beyond repair.