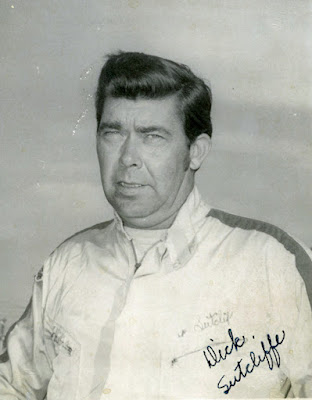 Topeka, Kan. (September 10, 1972) – Dick Sutcliffe, who hasn’t seen many breaks go his way lately, made the most of it to bag the IMCA sprint car feature at the MId-America Fair on Sunday afternoon. The big Greenwood, Mo., pilot moved from the seventh starting position to the pole position when Saturday’s winner, Earl Wagner of Pleasantville, Iowa, was forced out of the race with a broken fuel line.
The pole position was the key to victory on the dry, slick track which made passing a rare and scary happening all afternoon. Sutcliffe beat Chuck Amati of Greenfield, Tenn., to the first turn and led the whole way despite some anxious moments in the final laps.

As Sutcliffe neared the end of the 30-lap event he caught up with a pack of slower cars and it was then he needed some cooperation and some luck. He got both drivers doing their best to give him room, and when he was held up momentarily, so was Amati, who had pulled up on the rear of Sutcliffe’s #19.

Sutcliffe and Amati had the race all to themselves with Roger Larson of Solomon, Kan., in third, far back of the leaders. Thad Dosher of Topeka who finished fourth, needed a lot of time to get around Jay Woodside of Kansas City and Ron Perkins of Des Moines. Eddie Leavitt of Kearney, Mo., who started eighth, move the farthest through the pack and claimed fifth.

It took five tries to get the feature underway as drivers tried for the low groove on the starts and spins and crashes resulted.

On the fourth try, Earl Wagner went over an embedded wheel, bounced into the air, came down heading in the right direction and continued. However, he soon stopped when the fuel line came loose from the broken tank.