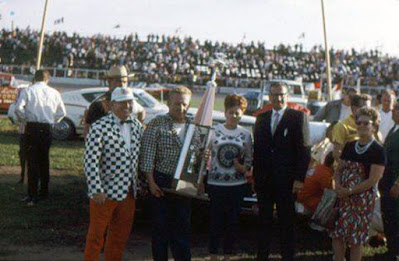 The new champion went home $1,745 richer for his efforts.

Gerken snatched the lead early in the 200-lap contest and went “flat-out” to lap the entire 33-car field by lap 90. Gerken’s engine would start to develop problems, his aggressive pace would slow and as his power decreased as laps ticked by, and the rest of the field would begin to un-lap themselves.

At that point, Rockford champion Joe Shear accelerated past Gerken into the lead on lap 124. As Shear started to distance himself from the field, Dan Prziborowski of Savage, Minn., passed the ailing Gerken as well to take the second spot.

Shear would maintain the top spot until lap 184 when the rear end started smoking on Shear’s 1967 Chevelle. After Shear retired to the pit area, Prziborowski took over the top spot on lap 186 with a straight-away advantage over Gerken.

A few laps later Prziborowski, however, would get involved with some lapped traffic and cut a tire sending him into the pits for a replacement.

This put Gerken back into the lead with 22-year-old Shakopee, Minn., sensation Larry Smith breathing down Gerken’s neck. On the backstretch of the 199th and final lap, Smith got by Gerken, but the “old pro” snuck past Smith on the fourth turn and raced to victory by half a car length.

Ramo Stott of Keokuk, Iowa, set a new track record in qualifying, touring the high-banked quarter mile in 14.90 seconds, collecting a $100 bounty in the process.