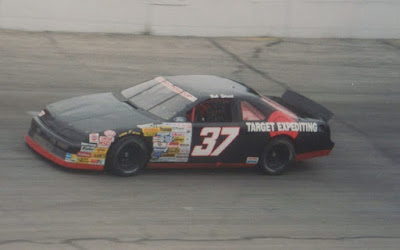 Frank Kimmel passed Keselowski with a searing move on the front straightaway as the green flag dropped following a late caution. He had his first ARCA victory in 38 tries in the bag.

Bob Strait put the same move on Kimmel at the same spot one lap later, vaulting past Kimmel to win the Fall Classic for the second straight year.

It was an incomprehensible finish.

Strait was in the process of being passed by Keselowski on lap 195. Just as Keselowski was about to put him a lap down, Bob Schact’s car spun, and brought out a caution, saving Strait.

“When I was about two inches away from getting him, I’ll bet he never dreamed this would happen,” Keselowski said.

Was it an unbelievable disappointment for Kimmel, a 31-year-old who calls this his home track as much as any?

He was winless in two years of ARCA racing despite being consistently competitive and being in the top-six of points.

Sunday, he gunned into the lead on lap 106. He was passed by ARCA point leader Tim Steele on lap 126, then got it back on 137 when Steele had rear end trouble.

Kimmel then straight-armed some of ARCA’s hottest drivers – Strait, Keselowski and Bobby Bowsher among them – until lap 167. Keselowski took a half-lap lead. Then came the last yellow, cars bunched up, and Kimmel made the move that surely would make him a winner.

“It was a dream come true at that point,” Kimmel said. “I just didn’t quite do it.”

Strait set a track record in qualifying, and two others beat Bowsher’s year-old mark. Then one driver after another found Salem, with hits high-banked turns, a fender-bending place to be. Of the first 117 laps, 41 were under yellow.

“Terrible,” Strait remarked. “Nobody wanted to give anybody room, and there’s no room forgiveness out there.”

Schact’s spin destroyed Keselowski’s runaway lead and put Keselowski, Kimmel and Strait - the only three on the lead lap – nose to tail for the final dash.