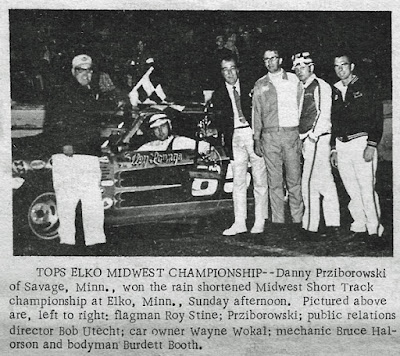 Elko, Minn. (September 20, 1970) – Dan Prziborowski of Savage, Minn., returned to the heights only champions know when he won the coveted rain-shortened Midwest Late Model Championships at Elko Speedway on Sunday afternoon, successfully defending the crown he first won a year ago.

The 14-year stock car veteran of area stock car circles proved conclusively to his many fans and friends that he could come back from a brutal winter-time car accident, a mid-summer’s suspension plus various troubles with his race machine to make it back to the top.

For his troubles which also included winning a Saturday night feature, placing eighth in time trials and leading for 26 laps, Prziborowski took home nearly $1,400 plus accessory prize including a year’s supply of 7-Up.

The Savage, Minn., wheelman won the Labor Day feature plus two features just before to become the Tri-Circuit’s winningest driver since mid-August.

Area drivers proved once again over the weekend that they can hot-foot it with the best of a field of 75 cars and drivers from five states. Burnsville’s Bob Jusola had sixth fastest time and finish second in the feature. Bloomington’s Don James, the Circuit’s most improved driver this year, claimed second in the consolation and third in the feature on Saturday then placed fourth in Sunday afternoon’s main event plus poste the top time for Tri-Circuit drivers at 14.855 seconds, just a shade off that set by John Ziegler of Madison, Wis., who spun Elko’s surface in 14.784 seconds, a new track record.

Larry Smith of Shakopee, Minn., had a feature victory and Marv Marzofka of Nekoosa, Wis., winner of the State Fair’s 300-lap event, took both a consolation win and a feature win on Saturday plus fifth on Sunday for a hefty payday.

Heat winners were all of the Tri-Circuit and included Bill Oas of Burnsville, Minn., Norm Setran of Bloomington, Minn., Harry Bahr of Minneapolis, Alex Metcalf of Minneapolis and Roy Lobstein of Eden Prairie, Minn.

Attendance at the third annual event held up remarkably well considering the threat of rain throughout with 2,875 on hand for Saturday’s program and 3,440 viewing the races on Sunday.