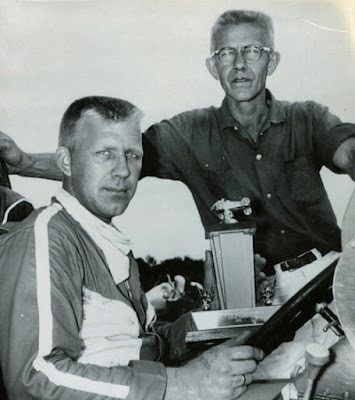 After taking the lead, Leep lengthened his margin to a full straightaway lead at the halfway point in the 25-lap event and led by three-fourths of a lap at the finish.

Don Brown of San Fernando, Calif., who had the fastest qualifying time on the day in his Chevrolet-powered sprinter, took second but was forced to fight hard for his position in the last lap of the race.

Jerry Blundy of Galesburg, Ill., was running a distant third at the halfway point but came on strongly in the final laps to finish third by a car length.

Blundy and fourth place finisher Bill Puterbaugh of Roxana, Ill., began a duel on lap 10 that was the center of attention for seven laps until Blundy pulled away.

Bob Coulter of Long Beach, Calif., wound his way from sixth position at the start of the race to finish fifth.

Coulter was actually the sixth car to finish but was ruled fifth because Gordon Woolley of Waco, Tex., had passed him in the next to last lap under a yellow flag.

Starter Woody Brinkman waved the yellow flag on the next to the last lap when Roger Lane of Blue Springs, Mo., spun out in the second turn of the five-eighths mile track and could not finish the race. Lane was not injured.

Lincolnites Lloyd Beckman and Lonnie Jensen finished tenth and twelfth in the race.