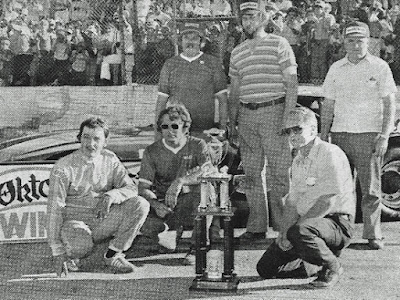 He did it by winning the first 100-lapper and placing third in the second race.

Out-of-towners placed 1-2 in the first feature, but Interstate veterans Dick Trickle of Wisconsin Rapids and Jim Sauter of Necedah, were 1-2 in the second 100-lap contest.

By the 30th lap, Miller was in control of the first feature and able to hold off Mark Martin of Batesville, Ark., for the victory.

Martin, who set a new track record in qualifying on Saturday with a time of 19.654 seconds on the 5/8-mile paved oval, finished about five seconds behind Miller at the finish.

Miller said he liked the two-race system to determine an overall champion. “That way, if something happens in the first race you have an opportunity to redo it in between,” Miller said.

At the beginning of the second feature, Wausau’s Larry Detjens, winner of the ’76 and ’77 Oktoberfest championships, drove to the top spot from his second row outside position. He was passed on lap 4 by Sauter and the pair opened up a gap on the rest of the field.

Trickle worked his 1979 Trans Am past Detjens on the second turn of the 19th lap and then rode Sauter’s draft until passing him on the backstretch of lap 25.

Martin had been running fourth, but rear end problems on his 1979 Camaro sent the 20-year-old hot shoe to the sidelines on lap 85.

For Sauter, the 100th lap came too soon. “I think I could have passed Dick had the race been a little longer,” he said. “The trouble is that Dick is a foxy driver, and you never know how much he’s using his car.”

Trickle said his Trans Am had more left. “I could have gone faster if I wanted to,” he said.

By contrast, Trickle said, “Everything was wrong in the first race. We replaced springs and tires between races.”

Sauter, who hasn’t won a feature here since 1974, was pleased with the day’s work. “This is the first time in 10 years I’ve finished an Oktoberfest race. I’ve never finished one,” he remarked.