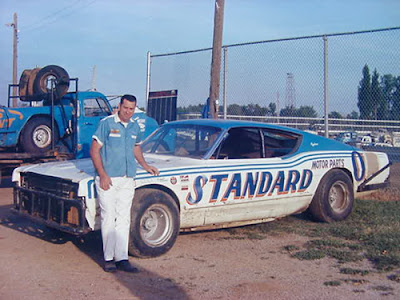 Ron Weedon capped off a dominant year by winning the season championship at Davenport.

Davenport, Iowa (September 11, 1970) – Ron Weedon of Pleasant Valley and Gary Kerres of Edgington, Ill., the respective point leaders in the late model and sportsman divisions at the Mississippi Valley Fairgrounds, became the season champions Friday night by winning their feature races in a couple of tight-knit battles.

Jerry Reinhart of Moline, Ill., led 49 of 50 laps in the late model finale, when Weedon, who had been on his back bumper throughout the contest, passed him on the outside of the third turn off the last lap to take the thrilling victory.

Kerres was dueling with Duane Steffe of Moline, Ill., and Maquoketa’s Lloyd Nabb throughout the sportsman main event before finally asserting himself near the end of the contest to secure the win.

Both Weedon and Kerres started on the pole position.

Jerry Sheldon of Davenport won the 15-lap feature race in the fun class to secure that division’s crown.