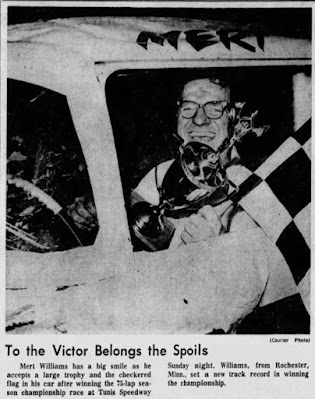 Waterloo, Iowa (September 13, 1964) – Tunis Speedway wound up their season as Mert Williams wound up the season for stock cars by winning the 75-lap season championship race in track record time.

Williams took the lead on the second lap and held it all the way in setting a new track record of 22 minutes and 58 seconds. The old record had been 23 minutes and 30 seconds.

Bill Zwanziger of Waterloo caught point leader Red Droste of Waterloo on lap 73 and finished in second place. Droste settled for third as only nine of the 20-car field were able to take the checkers.