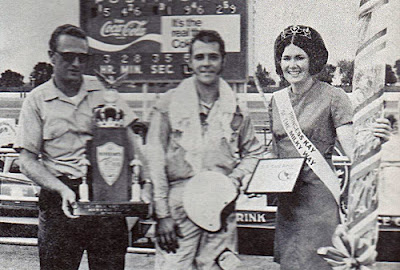 Sauter, from Necedah, Wis., who Saturday won $900 by capturing the championship in the twin 100-lap races, tacked on an additional $3,000 for the victory on Monday afternoon, although he was so exhausted, he had to take on oxygen to unwind before he could appreciate his triumph.

The outcome was more closely contested than usual in the 500 trips around the half-mile asphalt oval, as Sauter was credited with a nine-second margin over Jusola, a Burnsville, Minn., driver who piloted a Camaro through a pack marred by numerous crashes to challenge until the finish.

As usual, the antiquated International Motor Contest Association scoring system came under fire at the conclusion of the race. Jusola, who passed Sauter twice in the last 113 laps, thought he was the winner.

The race got off to a wild start when Bill Nelson blew the oil filter off his Dodge after only one lap, spinning into Bud Helm and pushing Helm’s car into the wall in the first turn. Just after that wreckage, fastest qualifier Marv Marzofka blew the engine in his Ford, causing Sauter and Duane Marshall to spin. Sauter had to go to the back, but quickly began passing cars.

But the big story of the first half of the race was a Wisconsinite, Tom Reffner of Rudolph. Reffner got his Mercury Cyclone out in front, and it appeared to be long gone. By lap 124, when he got by second place Mert Williams of Rochester, Minn., he was a full lap ahead of the field.

By lap 320, Reffner led Sauter, Jusola, Ernie Derr of Keokuk, Iowa and Irv Janey of Cedar Rapids, Iowa. But a lap later, Reffner pulled his car into the pit area with ignition problems.

Reffner’s crew tried a new set of spark plugs, but the real problem, eventually turned out to be Mercury’s points. At any rate, the lengthy stop cost him 25 laps. When he finally got going, he had to charge the rest of the way, to finish 478 laps – good for eighth place.

From then on it was Sauter and Jusola, and their duel kept the 3-hour, 35 minute and 35 second race alive. Sauter passed Jusola on lap 130 for third place behind Reffner and Williams, and both Sauter and Jusola made quick first pit stops – Jusola having the advantage of a traffic slowdown for a caution flag.

Sauter lapped Jusola on lap 225, then he pitted for 34 seconds on the 295th lap. Jusola’s second pit stop took 45 seconds, but, again, came when traffic slowed for a caution.

On the 340th lap, Russ Ebert of Pequot Lakes, Minn., took himself out n spectacular fashion, losing control on the backstretch and rocketing straight up into the wall. While a huge chunk of concrete tumbled away, Ebert’s car somersaulted onto its roof. He managed to scramble out uninjured.

Both Sauter and Jusola dashed in and out of the pits that time during the caution.

On lap 387, Jusola slipped past Sauter to lessen the leader’s margin by a lap. Then, turning consistent 23-second laps, Jusola overtook and got by inside of Sauter on lap 433, putting himself on the same lap as Sauter.

From there until the finish, Jusola crept up, ultimately getting to a 10-second deficit, with 25 laps to go, but was unable to get under that.

Derr finished third, three laps behind, with Williams, plagued by tire problems in fourth and Ron Hutcherson of Keokuk, Iowa, rounding out the top five.