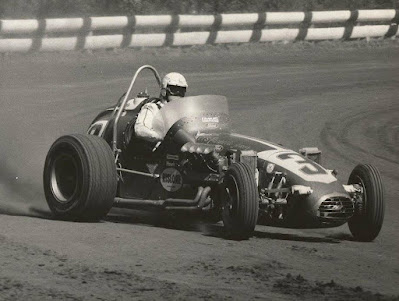 Sacramento, Calif. (September 28, 1969) – First came Greg Weld and Mario Andretti, then Billy Vukovich and last and most seriously Gary Bettenhausen to hurl challenges at Al Unser, who accepted and shook them off to win the Golden State 100-mile race wire to wire on Sunday afternoon.

Bettenhausen's bid to win fell short by a car length as Unser flashed across the finish line at the “Old Fairgrounds” with a broken rear suspension, which made the car about, as easy to handle as a loaded cement truck.

So hard was Bettenhausen, who started 15th in the field of 18, charging at the end that he got out of the groove and spun almost through the first turn and came to halt in a cloud of dust while 10,969 fans heaved a sigh of relief.

But Unser, who won his eighth career championship, almost came away empty handed when the suspension on his Ford - powered car let go with two laps left.

“The sway bar broke and when it fell down it popped the torsion bar,” said the 30-year-old Unser. “After that the car was very hard to handle.”

Weld, of Kansas City, took the pole in qualifying rounds with a 36.90-second lap in his Plymouth - powered STP Special and chased Unser until the 37th lap when Andretti slipped past his teammate. Weld never threatened after that.

Andretti was traveling five to six seconds behind Unser, but Vukovich took the challengers spot away at the midway point and Mario subsequently went out at 84 laps with engine trouble.

On the previous lap, Unser had to call on his driving skills when he got too high in the grandstand turn and nearly hit the fence. It was at this point that Vukovich and Bettenhausen closed the gap to three seconds.

When the three leaders came hurtling out of the far turn near the end of the 93rd lap the right rear tire on Vukovich's car blew. Pit crews scattered as the J.C. Agajanian Offy slid to a stop. Exit Vukovich.