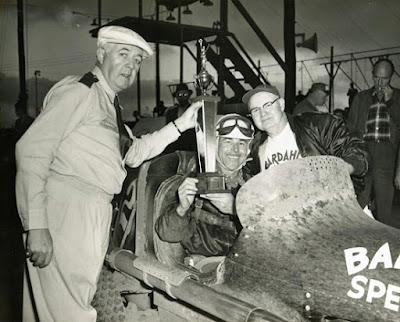 Lincoln, Neb. (September 3, 1961) – The holder of the most blue ribbons from the Nebraska State Fair is Pete Folse.

Not a Cornhusker but a Floridian, the little Frenchman wins things at Ed Schultz Downs with amazing regularity in the big car races.

Probably the only place where more blue ribbons have been bestowed than on Folse, is on the Honore Special Offenhauser he drives.

The black #2 has been winning here regularly for years.

Sunday’s grandstand crowd of over 15,000 expected Folse to win.

He took the Al Chamberlain Sweepstakes, a 20-lap hassle, so easily that it almost looked like they had already engraved his name on the trophy before the race was finished.

Just a quarter of a second separated him from a track record…and he had taken care of that by establishing a one-lap record in qualifying with a time of 29.01 seconds on the big half-mile dirt oval. It was Folse’s sixth feature win in seven attempts.

He lost just one outing when Herschel Wagner of Hickman Hills, Mo., nipped him by a wheel in the 5-lap Nebraska Handicap.

In the Inaugural Dash it looked like Arnie Knepper of Belleville, Ill., had things well in hand until a broken axle left him sidelined giving Folse an easy victory.

The track was exceptionally fast for the day and had to be wet down a couple of times to allow drivers to get traction with their knobby racing tires.