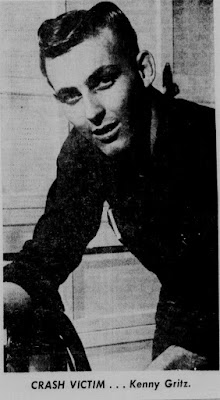 Lincoln, Neb. (September 1, 1969) - Kenny Gritz of Lincoln, who won the national super modified auto racing championships just two weeks ago at Knoxville, Iowa, was killed when his car went out of control in the feature race of the Nebraska State Fair sprint cars Monday.

Gritz apparently hit a hole in the track near the railing of the second turn on the northeast corner of the fairgrounds’ half-mile dirt track.

His Chevy-model car then catapulted into the air, flipped two or three limes and went over the railing. Apparently landing upside down on a concrete abutment but bouncing back upright with Gritz still in the car.

He was rushed to Lincoln General Hospital where he was pronounced dead upon arrival.

Gritz was the third fatality in 51 years of International Motor Contest Association-sanctioned racing at the fairgrounds.

The accident happened on the 13th lap of the 30-lap main event as Gritz was driving high on the outside rail, just to the right rear of Buzz Rose of Lomita, Calif.

At first it was believed that Gritz hit the rear axle of Rose’s car, but Rose said there was no contact between the cars. “He didn’t touch my car. There was a big hole above me, and I knew he was gonna hit it,’’ Rose said.

Ironically, Gritz had commented that the track was ideally suited for his driving style after finishing third in his heat race.

“The track was heavy and tacky, and you could get hold of it good,” he said, about an hour before the mishap.”

“I was moving higher because it offered the advantage of coming off lower and getting my momentum built up good. I don’t like dry, slick tracks at all, and the track today was in better shape than it was Saturday. The rain helped instead of hurting it.”

Then asked about his chances in the feature coming up, he replied, “I’m going to have to get up high.”

The other two fatalities on the fairgrounds’ oval were Al Chamberlain ten years ago and Al Champeau in 1946 on another holiday, Independence Day.

Gritz finished third in the second heat after having to start in the back row of the eight-car field. He nearly edged Rose for second behind winner Johnny Babb. Ed Leavitt started the next race from the same position and won it.

The front end of Gritz’s car was badly damaged. The highlight of his career was winning the national super modified championship at Knoxville, Iowa, in the same car on August 16. Gritz broke it in to competition just this year.

He almost didn’t make the race, having suffered severe facial burns when a leaky fuel tank he was welding exploded in his face the night before.

Gritz was looking forward to racing for the third-mile national championships Monday night at Eagle, then in big races later this month in Sioux Falls. S.D., and in October at Phoenix. Ariz.