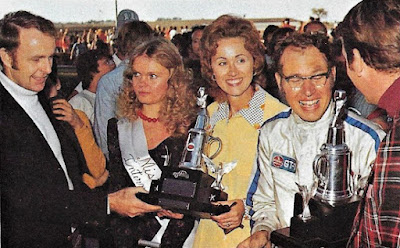 Buzzie Reutimann is all smiles in victory lane after winning the Schaefer 100 at Syracuse.

The Zephyr Hills, Fla., veteran, who has won back-to-back point titles at Nazareth Speedway, grabbed the lead on the 62nd lap around the one-mile dirt track and out-raced polesitter Tom Corellis of Rensselaer, N.Y., to the checkered flag.

The victory, the second straight in this race for Reutimann, brought the 32-year-old speedster $7,060 in purse, lap and contingency prizes.

Fifty-one cars started the race, which was staged before 18,000 spectators. The event had six different leaders, with Reutimann piling up more lead laps than any other driver.

Will Cagle, who raced for many years in Pennsylvania and New Jersey, but is now based in Albany, N.Y., during the racing season, was third. Billy Wilson took fourth and Reading point king Gerald Chamberlain was fifth.