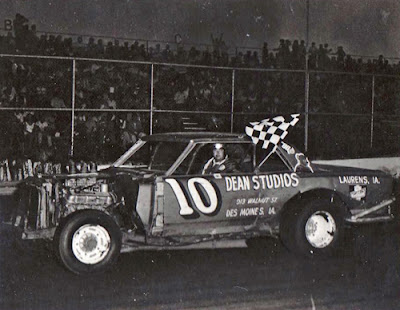 Boone, Iowa (September 3-4, 1972) - Denny Hovinga of Laurens broke the time barrier at the Boone Speedway again Sunday night as he lowered the mark to 17.14 seconds. The previous record was 17.17 seconds set by Hovinga last week.

Hovinga also won the Sunday night feature but had to settle for second Saturday night as Gene Schattschneider of Algona outraced him.

The battle Saturday night was one of the closest races this season as Hovinga and Schattschneider traded the lead back and forth. The Algona driver took the lead after two laps, only to lose it on a restart of the race.

He and Hovinga then, switched positions several more times until Schattschneider went into the lead on the back straightaway on the last lap and held it through the final two turns.

In the Saturday night super late model trophy dash Schattschneider had trouble getting around Arlo Dorenbush of Boone on the last lap and lost ground, ending up in a dead heat with Mike Keen of Marshalltown for fourth place. Dorenbush won the event, with Curt Houge and Del McDowall, both of Ames, finishing second and third.

In the first heat Saturday night Joel Rasmussen of Ames ran away from the field, while the second heat saw a bumper-to-bumper duel between Wayne Meyer of Algona and Schattschneider, with Meyer coming out in first place.

In the Sunday heat races, Mike Keen held off Hovinga to win one heat race, with Darreld Bunkofske of Algona winning the other one. Del Stokke of Ames won the Sunday night B-Main.

In the sportsman competition, Glenn Woodard of Des Moines won the feature event both nights. Saturday night he took the lead early in the race and pulled away, while on Sunday night he got inside point leader Rex Hill of Kanawha on the last lap to win by half a car length.

Saturday night Paul Chumos of Guthrie Center led all the way in the sportsman trophy dash, while Hill took that event Sunday. Norm Carlson of Ames and Woodard were the Saturday night sportsman heat race winners, with Gary Ulrich of Boone winning the only heat run Sunday night, due to a shortage of cars.