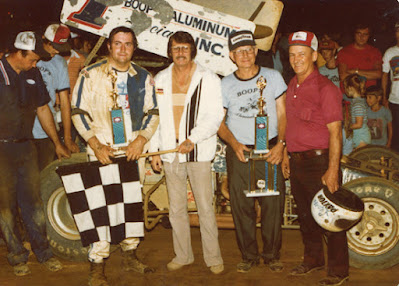 After years of trying, Lynn Paxton would nab his first career National Open title in 1982.

Earlier Saturday, Grove officials reviewed pictures of the finish of Friday’s 35-lap feature and declared Paxton a dead-heat winner with Blaney. Paxton pocketed an extra $500 as a result of that decision.

In a victory lane interview after his Open success, Paxton heaped praise on his mechanics, Davey Brown Jr. and Sr., for their work in preparing the Boop’s Aluminum #1 for the long-distance grind.

“When you start up front, you damned well better finish there,” Paxton said of his seventh Grove win of the season and the 37th of his career.

Paxton’s fastest of two laps as 53 cars took part in time trials was 20.82 seconds. That put him on the pole for the start of the race with Wolfe (20.84) on the outside of the front row. Lotier was third with a clocking of 20.94 seconds while Skeets Gamble turned in a 21.01 second effort and Ferguson did 21.14 seconds.

The new chassis which Smith had at his command was not up to snuff for the time trials, and the veteran driver had to run the 20-lap B-Main to make the show.

Smith came through in impressive fashion, leading all the way to beat Van May under the checkered. Dan Dietrich was third, Kramer Williamson fourth and Bischof fifth.

The 15-lap C-Main, which was first up after all cars had taken time, went to Keith Kauffman, who passed Allen Klinger with two to go. Kauffman was 11th in the B-Main, but Klinger failed to qualify.

World of Outlaws stalwart Bobby Allen was 14th in time trials with a clocking of 21.50 seconds but ducked for the pits shortly after the main event was waved off.