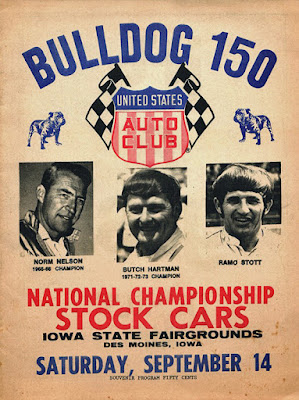 Des Moines, Iowa (September 14, 1974) – Butch Hartman won the Bulldog 150 late model stock car race and the United States Auto Club national championship for that division at the Iowa State Fairgrounds, but it was Ramo Stott winning the admiration of the 6,500 in attendance.

Still feeling the effects of first and second-degree burns on his hand and face, Stott led much of the 150-lap, 75-mile race and was kept from one last attempt to regain the lead when he ran over a piece of exhaust pipe and cut a tire.

That forced Stott’s 1974 Plymouth into the pits for replacement of his right front tire. The replacement was low on air and Stott, who could have finished as high as second, dropped back to sixth before the checkered flag fell.

Irv Janey of Cedar Rapids, driving a 1974 Dodge Charger, was second while Dick Hutcherson, a former Keokuk resident now living in Charlotte, N.C., was third, and Ernie Derr of Keokuk was fourth. Norm Nelson of Racine, Wis., who had been the USAC stock car point leader going into the race, finished fifth.

Hartman earned 200 points for the victory and finished with 3,270 points. Nelson earned 140 points and ended the season with 3,240.

Dick Hutcherson, who now builds race cars after retiring from full-time driving several years ago, was the initial leader. His chance at winning, however, was jolted when Ralph Latham of Cincinnati, Ohio, and Hutcherson collided on the 42nd lap.

“Hutch” managed to keep it going, but he lost a lap and Stott took command for five laps. Janey led laps 49 – 55. Hartman then took over for 19 circuits at that point. Stott roared past Hartman on lap 76 and cruised to a half-lap lead on the half-mile dirt track.

However, Ramo had not made a pit stop and he was forced to refuel on lap 126. He pulled back onto the track just as Hartman went past, taking the lead.

On lap 137, Ramo was back in the pits with tire problems.

Ramo had suffered first and second-degree burns a week ago in Milwaukee when his engine exploded, and fire shot into the interior of his racer.

He wore heavy gloves on his hands and a mask over his face. “I got awfully hot,” he said. “My hands sweated a lot and it brought out a lot of blisters.”

“I knew Ramo had to pit again, so I just cruised along and waited for him to go in,” said Hartman, who now has won an unprecedented four straight USAC stock car championships.

Norm Nelson did not make a battle of it with Hartman, although Butch started in the second row of cars and Nelson was in the third row.

“It wasn’t my kind of track,” moaned Nelson afterwards. “The track was too rough, and I drive best on a smooth dirt track. “