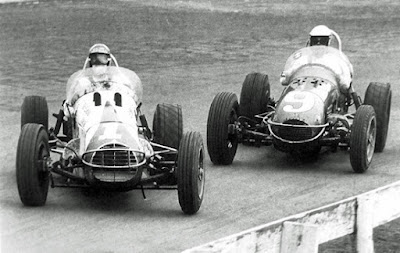 The old mark of 13 minutes and 32.29 seconds set by Jim Hurtubise of Lennox, Calif., last year was broke by almost a full minute as Jones covered the distance in 12 minutes and 22.71 seconds.

The former 8-lap mark of 3 minutes and 25.34 seconds set by Tommy Hinnershitz of Oley, Penn., in 1959 went overboard twice in qualifying heats. Jones made the trip in 3 minutes and 22.76 seconds to capture the first heat and Jiggs Peters of Neshanic Station, N.J., covered the distance in 3 minutes and 24.54 seconds in another heat.

Although 14 cars started, it was strictly a two-man affair. Jones, the leading driver in the United States Auto Club point’s standings, had his hands full fighting off A.J. Foyt of Houston, Tex., a former Indianapolis 500 winner and a crafty, determined opponent.

After maintaining their one-two positions from the start, the two engaged in a duel that grew hotter and hotter in the closing laps as Foyt made his move to gain the lead.

But Jones was able to foil his every effort by clever use of the corners, closing all avenues by which Foyt might pass him.

A battle almost equally exciting, although not figuring in the first two positions, was waged between Roger McCluskey of Tucson, Ariz., and Bud Tingelstad of Dayton, Ohio. Tingelstad clung to third place for 23 laps and then had to yield to McCluskey’s skill and daring. McCluskey finished third while Tingelstad settled for fourth and Peters took fifth.