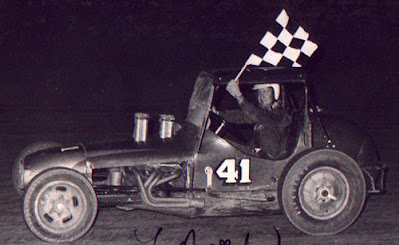 Lincoln, Neb. (September 8, 1966) - Tom Bigelow of Whitewater, Wis., swept the feature and the opening heat as local drivers went without a win in Thursday’s super modified Midwest Championship at the Nebraska State Fair.

Bigelow jumped off to a big lead and was never headed after the second restart in the 25-lap feature.

Blundy, however, tangled with Lincoln’s Lloyd Beckman late in the race and both spun out. Beckman managed to restart but Blundy elected to retire for the day rather than drop to the back of the pack.

“I knew Leep was back there,” Bigelow said. “But I thought I could stay ahead if I kept the car straight and smooth.”

“Once you’re out in front, it’s hard for anyone to get by you unless you goof up,” Bigelow continued. “So, I just played it cautious.”

It was the first time Bigelow had run in the Fair’s super modified races. Last year he ran second, third and fourth in the three sprint features but had to pass those events up when he blew an engine at Sedalia, Mo., recently.

It was Bigelow’s fifth feature win of the year in his new Chevy-powered racer, a car owned by Mel Moffitt of Port Byron, Ill.

Bigelow, the 1965 International Motor Contest Association co-rookie of the year along with Bill Puterbaugh of Roxana, Ill., last week had won the modified championship at the Minnesota State Fair at St. Paul.