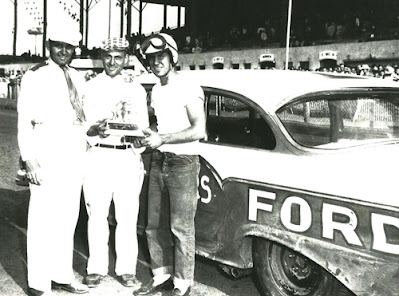 Lincoln, Neb. (September 6, 1957) – Johnny Beauchamp raced across the finish line the length of a car’s hood ahead of Bob Burdick in the Nebraska International at the State Fairgrounds on Friday afternoon, but the 22-year-old Omaha sensation was declared the winner on a rule’s infraction.

After waging a see-saw fight throughout the 200-lap event, Burdick held the lead going into the 197th lap when the yellow flag waved cautioning drivers to hold positions while a car was removed after spinning.

Before the stalled car was removed on the 198th round, Beauchamp had thought the green flag had been waved and passed Burdick illegally.

The two battled bumper-to-bumper for the remaining two laps with Beauchamp hitting the finish line with a scant lead over Burdick. Starter Gene Van Winkle had given the white flag and the checkered flag to Burdick and the other judges declared his decision correct.

Young Burdick jumped into the lead at the beginning of the race which mixed sports cars and standard stock autos, with Ernie Derr, Beauchamp and Don White following closely in that order for the first 25 laps.

At the 50-lap mark it was Burdick, Derr, Beauchamp and White with the positions remaining that way until Burdick stopped for gas on lap 125 with Beauchamp taking over the top spot.

Beauchamp remained up front until lap 183, when with Burdick riding his bumper, the 1956 IMCA champion hit a soft spot in the track which threw him wide and cost him the lead as Burdick kept his car low and sailed by.

The Omaha youngster then increased his lead to six car lengths at the time of the yellow flag incident. Johnny then made the mistake of passing but took the officials ruling with a champion’s grace.