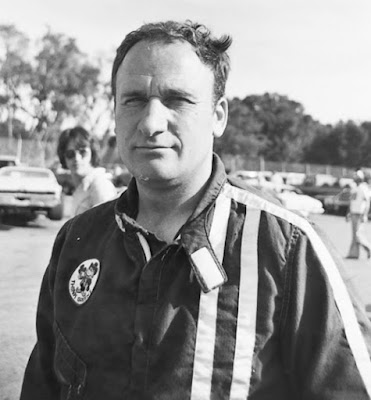 Oregon, Wis. (August 31, 1975) – Ed Howe was “imported” to the Capital Super Speedway on Sunday afternoon to give the local drivers a run for it and when the day was over very late model in the field was thoroughly tired of chasing the Beaverton, Mich., around the half-mile paved oval.

Howe set second fastest time, then came back to score solid wins in the first 50-lap feature and the 100-lap finale.

Joe Shear of South Beloit, Ill., gave Howe his stiffest challenge in the 100 after winning the other 50-lapper.

The field was broken down with even qualifiers starting the first 50, the odd the second and the fastest 13 from each in the finale.

In the initial half-century, Bob Roper of Chicago, led the first half-dozen laps before Rich Somers of Stevens Point, eased his 1972 Mustang ahead on lap 7.

Roper spun his 1975 Camaro on the second turn of lap 10 and brought out the first caution. Howe, after starting 15th in the 21-car field, was up to fourth.

It took two laps under the green for Howe to catch Somers for the front spot. Dick Trickle of Wisconsin Rapids followed Howe past Somers to take second on lap 13.

The final yellow banner was flow on lap 28 when Red Hutchinson of Beloit spun his 1972 Nova in turn two. Howe had a three-second bulge at the time.

The return of the green flag brought another Howe sprint that re-established a comfortable lead. Trickle slowed on lap 47, apparently out of fuel and third-place Mike Miller of Wisconsin Rapids pushed him for a lap without losing position.

When fourth-place Jim Pierson of Janesville caught up with the Mustang tandem, Miller gave Trickle a final shove, and took over second, successfully holding off Pierson.

Trickle coasted another lap and placed eighth, one lap down. Larry Schuler of Lockport, Ill., garnered fourth, behind Pierson and Don Leach of Beloit was fifth.

The second 50 lined up another 21 cars. Butch Ledy of Park Forest, Ill., led the first three laps before Bob Gunn of Monona asserted himself. Gunn was scored as the leader for laps 4 through 7 and then Shear, up from 13th in the starting grid, took over for good on lap 8.

Fast qualifier Tom Reffner of Rudolph captured the attention of the crowd, charging from his 16th starting position. He took second from Caledonia’s John Reimer on lap 22 and was a bout a second-and-a-half behind the leader.

Reffner narrowed the gap to about two car lengths by lap 37 but brake and handling problems in the ono-stop event forced him to slow his pace.

Shear finished the contest with about a three-second margin, with Reffner settling for second and Reimer in third, a half-lap back.

The 100-lapper began with Doug Strasburg of Johnson Creek leading the first pair of laps before Somers took over.

The caution flag flew on lap 13 when John Ziegler and Reimer collided on the main straight with both Camaros going into the wall. Both cars were finished for the day.

Yellow flags below 90 counted so the green flag didn’t wave until lap 22 with Somers still in command, followed by Strasburg, Shear, Gunn, Trickle and Howe.

Shear moved into second on lap 24 and Trickle took possession of third on lap 27. Howe dropped Trickle back to fourth on lap 31 and Reffner moved Trickle back even further two circuits later.

Leach stalled on the main straightaway on lap 38 and the caution waved again.

The green flag got the field rolling again on lap 44. Howe moved past Somers into second on lap 46. Reffner took third and Trickle dropped Somers another notch on lap 47.

Howe, pacing himself, gradually moved up on Shear’s bumper on lap 64, and then powered into the lead on lap 65.

With Howe, Shear, Reffner, Trickle, Somers, Miller, and Gunn comprising the unlapped cars, all went well until lap 94 when Gunn and Miller tangled in the second turn with their 1970 Mustangs hitting the wall. Gunn was shaken up and taken to a hospital for observation. The damage to Miller’s car was minor and he was able to continue.

A final six-lap sprint was set up with Howe, Shear and Reffner out to claim the win.

Howe, however, was up to Shear’s challenges, and Shear, in turn, held back Reffner’s advances. The three were separated by about a car length at the finish. Trickle took fourth, Somers fifth and Miller rebounded to take sixth.