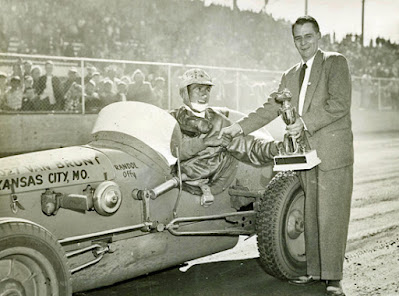 Slater avenged his loss on Monday to Jimmy Campbell, who ran second to him on Tuesday. Slater’s time for the 10-miler was 9 minutes and 51.25 seconds. The former midget pilot lapped everyone in the field except for Campbell.

Finishing behind Slater and Campbell were Don Branson of Champaign, Ill., Phil Mocca of St. Louis and Herschel Wagner of Hickman Hills, Mo.

No time trials were run except for Dean Woolheater of Des Moines, Iowa, who did not time trial on Monday. He was clocked at 30.04 seconds in his car powered with a DeSoto Fire Dome eight-cylinder.

Slater and Campbell made an assault on the track record, however. Monday, Campbell had tied the mark of 24.85 seconds for one lap, held by Deb Snyder.

Tuesday, Slater turned a 25.25 lap while Campbell was in 24.86 seconds – a hundredth of a second over the mark.