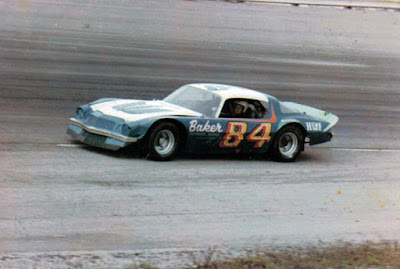 The "Michigan Bluebird" Bob Senneker won his second Dri-Powr 400 at the high banks of Winchester Speedway.

Winchester (September 28, 1975) – Bob Senneker became the second two-time winner of the “Dri-Powr 400” Sunday with a convincing victory at Winchester Speedway.

Senneker, the “Bluebird” from Dorr, Michigan, pushed his ’75 Camaro to five-lap victory over Art Sommers of Warren, Mich.

It was his second consecutive win in the “Dri-Powr” championship for Senneker at the fifth straight late model feature for him over the half-mile high-banks. He won the 1974 “Dri-Powr” in his very first appearance at Winchester and has since recorded victories in three 100-lap American Speed Association late model events there prior to Sunday’s sixth running of the 400-lap classic.

Senneker’s winning time of 2 hours, 46 minutes and 30.81 seconds was 14 minutes slower than his record of last year when he averaged 78.530 miles per hour. His average speed this year was 72.066 miles per hour.

Misfortune struck down his closest competitors late in the race, leaving Senneker to move his way to the checkered flag virtually unchallenged. Terry Bivins, Shawnee, Kan., ran within a lap of Senneker from just about the 300-lap mark until he nicked the outer retaining wall at the 359-lap mark and retired with suspension damage.

The next closest pursuer, Randy Sweet Portage, Mich., who tapped the outer wall in the second turn and dropped a position to third just 20 laps from the finish.

An overflow crowd of 7,500, no doubt encouraged by near-perfect weather, watched a race that was surprisingly clean despite 13 cautions flags. No one was injured in the mishaps, but much oil from tanks punctured by debris on the track was dumped on the racing surface.

Moore, who started on the pole position after obliterating the world one-lap record in Saturday’s qualifying, set sail from the start, and appeared ready to challenge Senneker’s string of victories.

But the former “Fairborn Flyer” and Senneker spun on the backstretch and Moore’s Camaro clipped enough of the outer guardrail that it was out of action for the rest of the day.

Senneker then led until lap 50 when he stopped for fuel. Maier took over the top spot until the 88th, when Sweet led his only lap of the afternoon. After getting the lead, Sweet dropped off the pace with Maier back in charge again until lap 94. On lap 95, NASCAR late model sportsman ace Harry Gant of Taylorsville, N.C., went to the lead in his ’75 Chevy Nova.

Sommer would take over the lead on lap 114 and hold that spot through 141, then Senneker from 142 to 236, and Gant again from 237 to 261. It was there that Gant came to the pits with a broken ball joint. He lost 12 laps in the pits while his crew frantically replaced the parts.

Dave Sorg, Fort Wayne, the other two-time winner, was one of those whose oil tank picked up debris. His crew welded the hole as best they could, but Sorg finally retired after 64 circuits. The other ex-winner, Vern Schrock, Middlebury, ran with the leaders for the first 50 laps, but lost a couple of laps in the pits and finally retired after lap 182 with a faulty oil pump.

Jim Hurtubise, Clermont, a favorite of racing fans wherever he goes, lasted only 34 laps until steering failure put him into the concrete wall.