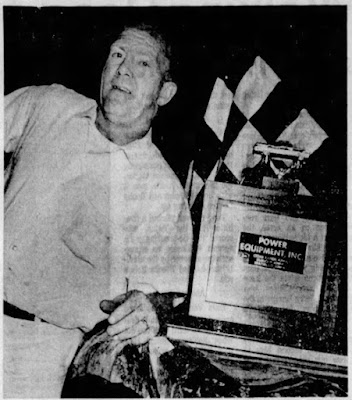 Red Droste of Waterloo leans against his car, while on the hood is his first-place trophy for winning the 50-lap season championship at Tunis Speedway. – Chuck Anderson Photo

Waterloo, Iowa (September 10, 1967) – Red Droste, running off the pole position at the start of the race, won the season championship Sunday night at Tunis Speedway.

Droste, a veteran driver, earned $600 for winning the 50-lap race. He qualified for the pole position by scoring the most points during the regular season.

Coming in second to Droste was Bob Hilmer of Dysart while Mert Williams of Rochester, Minn., was third.

Curt Hansen of Dike won the 25-lap consolation. Dave Bedard of Waterloo was second followed by Claus Stricker of Waterloo.