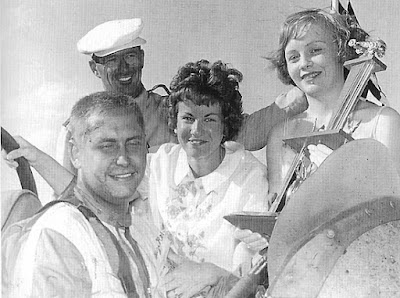 Buzz Rose is joined by his wife, trophy queen and IMCA official Woody Brinkman after scoring his first-ever IMCA victory.

Des Moines, Iowa (September 2, 1961) – Buzz Rose, a sophomore in big-time dirt track racing, captured his first major victory on Saturday afternoon with an Offenhauser on a slick track tailor-made for the Chevrolet-powered contenders.

Hugging the guard rail on a hazardous track that resulted in three crashes, Rose took the lead from Herschel Wagner of Hickman Hills, Mo., on lap 4 and was never headed.

Earlier in the afternoon, the 23-year-old ex-Marine and graduate of midgets two seasons ago, crashed into Jay Woodside of Wichita, Kan., piggy-back style on the third lap of the second heat.

Both drivers and cars came out with little or no damage, but they were both put in the rear on the restart and neither got into the money until Rose chased Woodside home in the 10-lap consolation to earn a spot in the feature.

Seven cars were involved in two pileups that came on the opening lap of the main event.

The first came on the inaugural turn. When the dust settled, Folse, Dale Breedlove of Waco, Tex., Jerry Shumaker of Wichita, Kan., Froggie Droz of Ottumwa and Dick Johns of Bellflower, Calif., were stalled in a tangle.

Before the leaders could be halted, Harold Leep lost a wheel on the west turn and bumped Buzz Barton of Tampa, Fla., into a spin. All but Johns got back into the race.

Folse had nothing but trouble. The Tampa Frenchman barley claimed a fourth-place finish in the second heat to qualify and then switched to a pair of borrowed, treadles tires.

It didn’t help that the champion started eighth in the feature. By lap 5 he had dropped back to ninth. With no traction, Folse was hesitant to take the Black Deuce to the outside for fear of hitting the wall.

Rose, who started in the front row, squeezed in front of Wagner and was challenged only by Barton during the last 25 laps. The field, an eighth of a mile behind, cautiously rolled around the track in single file.

Arnie Knepper of Belleville, Ill., finished where he started – in third place, followed by Harold Leep, who started fourth and finished fourth.

The victory was worth $750 for Rose, and car owner Diz Wilson, the Indianapolis Speedway parts dealer whose other car was occupied by fifth-place finisher Jim McElreath of Arlington, Tex.

Rose’s best previous finish was a third-place finish in a Cadillac-conversion outfit owned by Lester Robertson of La Puente, Calif.