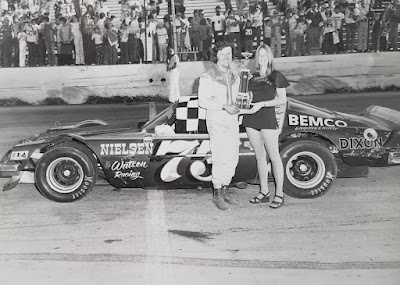 In the midget portion Jim McClean won the 30-lap feature, but Jim Gates was the big winner as he finished in front of Don Vogler in the feature for the UARA point championship by a mere 11 points.

McClean passed Lars Lein for the midget feature lead in the 19th lap and was off to the win, but Gates passed Vogler midway and then held off his challenge at the finish of the event, finishing second.

The late model feature saw Tom Musgrave take the lead at the green flag and hold it for 10 laps before Don Gregory moved ahead. Back in the pack, Watson broke through first with Schuler in pursuit and getting in front on the 17th lap.

Schuler scooted into the lead on the 21st lap and was four car lengths in front when apparently a piston broke sending him to the sidelines.