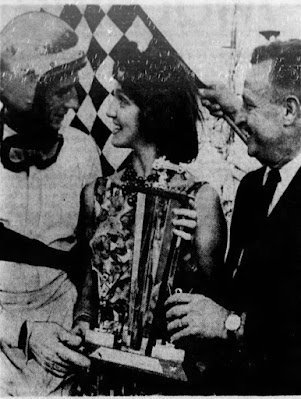 A crowd estimated at 9,500 saw White fall to second place on the first lap, the only time during the two days of racing that he hadn’t been in the lead. Ray Duckworth of Anderson, Ind., zipped past White on the first turn and remained in front until the 13th lap.

After the race, White said, “I was wondering there for a while, but I figured I’d get him before the day ran out.”

Diz Wilson, owner of the car White piloted, pointed out that the car has never been beaten at the track. A.J. Shepherd, who has since joined USAC, piloted the car to victories here for three straight years.

Jerry Richert of Forest Lake, Minn., was third as the cars circled the half-mile banked asphalt oval for the first time. He got by Duckworth on lap 17 for second place and finished in that position. Duckworth settled for third while Tampa’s Buzz Barton was fourth and Jerry Blundy of Galesburg, Ill., rounded out the top-five.

One of the best races witnessed was the Australian Pursuit, which was won by Gordon Woolley of Waco, Tex. Woolley started last and kept lopping off cars one by one until he came upon Jerry Bundy. They went around for five laps, side by side, until Woolley was able to take command. The crowd loved it and seemed that everyone in the stands were on their feet, cheering.

Honore elaborated, stating that all of IMCA’s races, except for Nashville, are run on dirt tracks and he refused to change one screw on Folse’s car, just for two races on asphalt. Prior to Nashville, Folse had won five straight IMCA-sanctioned features.