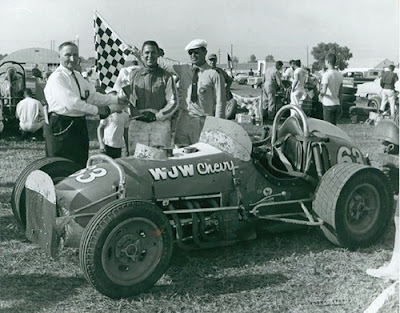 Lincoln, Neb. (September 7, 1964) – All track records that were not broken on Sunday’s program were busted during the Labor Day show, as IMCA sprint car drivers continued their assault against Nebraska timing devices.

The action took place on the finely manicured 5/8-mile dirt oval at the Nebraska State Fairgrounds.

Jerry Richert ended the record runs when he won the 25-lap main event. Don Brown, a young man in a hurry, took the lead at the green in the fourth annual “Al Chamberlain Sweepstakes” and appeared to be the victor.

Fate determined otherwise, however, as Brown drifted high in the first turn on lap 16 and Richert darted under him in a split-second for the lead.